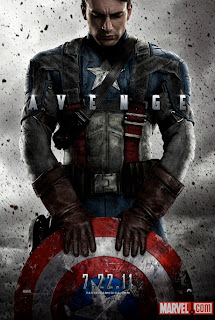 Once THE WIRE re-up was over, life seemed pretty empty. So empty that I submitted to a Buffy Re-Up, courtesy of two friends of mine who are super-fans of all things Joss Whedon. I was intially sceptical. Vampires? Teen angst? Lo-rent make-up effects? Seriously? However, I'm half way through series 2 and I have to say I'm really starting to enjoy Joss Whedon's wonderfully witty use of the English language - the energy and plasticity of it. I got that same sense of playfulness as I watched CAPTAIN AMERICA: THE FIRST AVENGER. What gave it away? Characters uttering dead-pan cool witticisms rather than screaming when a big bad man blows up shit. The tone was anachronistically, inappropriately US-teen-cool for a movie supposedly set during World War Two.

And then it all clicked! Joss Whedon had been given the script penned by Christopher Markus and Stephen McFeely (the NARNIA movies). According to IMDBpro he is meant to have done a light re-write to tie it in to the wider Marvel universe, and in particular THE AVENGERS movie that he's directing. But I suspect that Whedon did more than just tie up some narrative threads. Because when this movie is at its most entertaining, and its most emotionally real, it simply DRIPS Joss Whedon.  You can see the impact of Whedon on the success of the final film. It works best in the first two thirds, where it really is all about character and relationships. It works least in the final third when it descends into a pretty much super-hero-movie-by-numbers final battle scene....

But anyway, enough of my current Whedon-kick and on with the normal review. CAPTAIN AMERICA is the latest feature-length incarnation of the comic book hero created by Joe Simon and Jack Kirby in the 1940s - a deliberately patriotic and wholesome character designed to boost morale during World War Two. The superhero is really Steve Rogers - a physically un-prepossessing but morally upstanding young man desperate to enlist and fight the Nazis. Dr Abraham Erskine, a German-Jewish refugee and Papa Stark use a serum and some Vita-Rays (TM) - to turn Rogers into a buff super-soldier.

Interestingly, rather than kicking Nazi ass immediately, the lone super-soldier takes a side-turn, and is consigned to marketing war bonds - a parody of his future super-hero status, and highly reminiscent of the subtlety and post-modernity of Alan Moore's WATCHMEN. After this false start, Captain America start to fight in earnest, under the direction of Colonel Chester Phillips and his attractive protégée, Peggy Carter, not to mention Papa Stark. Captain America also has a bunch of mere mortal side-kicks, including his best friend Bucky, but rounded out with a Japanese-American, an African-American, an Irish-American, a Frenchman and a Brit. This isn't so much tub-thumping jingoism, then, as the United Nations. I would love to know from anyone who has read the comics whether this rainbow-nation of do-gooders is, as I suspect, a highly modern and politically correct re-write.

Steve Rogers' journey to becoming Captain America makes for a fascinating origins story. Chris Evans (FANTASTIC FOUR) gives a fine and convincing performance as the sensitive young man fiercely opposed to bullies, and he is ably supported by Tommy Lee Jones, Stanley Tucci, Haley Atwell and Dominic Cooper as Phillips, Erskine, Carter and Stark respectively. Stanley Tucci's Erskine has a wonderful comic interchange early on with Rogers over a bottle of schnapps that quickly and efficiently establishes a bond that pays off a few scenes later. It's a shame no comparable emotional bond was created between Rogers and best friend Bucky (Gossip Girl's Sebastian Stan).

I loved the sepia-tinted 1940s production design, the costumes, the hair, and the sheer atmosphere of it all. And whoever CGI-morphed Chris Evans head onto a short, weedy body deserves much credit because the work is utterly seamless. I also loved the make-up that transforms Hugo Weaving's mad Nazi into the evil head of Hydra, Red Skull - intent on using the power of the Norse Gods to unleash war on the entire earth. In fact, just for the nostalgic look of the film - half Indiana Jones - half Watchmen flashback - this is probably my favourite superhero film of the summer, alongside the X-MEN movie. It turned out to be, rather to my surprise, a wonderfully well-made, beautifully-imagined, and Whedon-witty movie.

That said, the movie does have its faults. The Bucky storyline doesn't pay off in the way it should. The final third is dull. Peggy Carter has the beginnings of a great character - a feisty, bright woman. But what's she there fore apart from to look good? Stark builds shit; Phillips commands shit; everyone else fights shit; but Carter just pouts. I mean, what is this agent really meant to be doing? Is she a scientist? A military mind? What? Poor writing.  Similarly, the politically correct side-kicks are fine, but where is the moral clarity that should come with a fight against the Nazis. Oh but I forget. We're not really fighting the Nazis are we - but some weird ambiguous generally evil guy, who's harder to get a grip on, or care about. Speaking of which, I really do wonder at director Joe Johnston's (THE WOLFMAN, JURASSIC PARK III) indulgence in allowing Hugo Weabing to do the entire film with a German accent that sounds uncannily like Werner Herzog. It was so pitch perfect that is seriously took me out of the movie in every scene - undercutting the serious subject-matter and high emotional stakes.

CAPTAIN AMERICA: THE FIRST AVENGER is on release in Canada, Italy, Poland, the US, Iceland, the Philippines, Argentina, Australia, Malaysia, the Netherlands, Peru, Russia, Singapore, Slovenia, Thailand, Armenia, Brazil, Colombia, Estonia, India, Ireland, Lithuania, Mexico, Panama, Paraguay, Taiwan and the UK. It opens next weekend in Hong Kong, Hungary, Israel, Portugal and Spain. It opens on August 12th in Denmark, Norway and Sweden. It opens on August 17th in Belgium, France, Germany and Finland. It opens on September 1st in Greece, the UAE and Turkey. It opens in Japan on October 15th.
Posted by Bina007 at 21:13