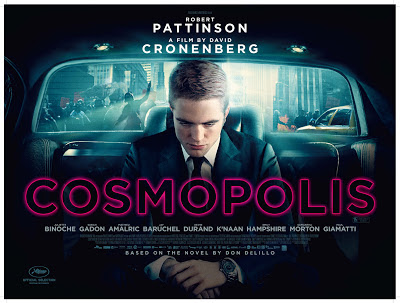 COSMOPOLIS is a steaming pile of pretentious wank. This may well be the point. Either way, it's boring as hell. Robert Pattinson plays a young Wall Street "big swinging dick" stuck in a limousine for a day as he tries to cross town for a haircut but is trapped in heinous traffic by a presidential motorcade and anti-capitalist protesters  En route, he meets his wife, lovers, advisors and a doctor. All of these people, and the antihero himself, speak in a bored self-assured monotone. Mostly they speak in nonsensical platitudes. There are no emotions, and little real intellect. They are trapped in a slick process, and smugly content there. When the antihero's wife says "it hurts" she shows no emotion. Her husband responds by telling her "my prostrate is asymmetrical".  It's all basically bollocks, especially the bits where Cronenberg (or maybe source author David Cronenberg) try to construct dialogue that refers to central banks or any actual financial happenings.

Is this how the creative industry views Wall Street? A bunch of humourless, self-deluded, pretentious, vapid cyborgs? Because it's nonsense.  If you want to really know about Wall Street and its ethics you can watch MARGIN CALL.  Because COSMPOLIS is nothing more than beautifully produced but alienating and alienated nonsense. And as for the ending, don't even get me started on just how massively Cronenberg pussies out.

COSMOPOLIS played Cannes 2012 and opened earlier this year in France, Italy, Belgium, Luxembourg, Switzerland, Hungary, Portugal, Croatia, the Netherlands and Canada. It opens this weekend in the UK and Ireland. It opens on June 22nd in Poland, June 28th in Israel, July 20th in Russia, Bulgaria, Estonia, Latvia and Lithuania, on August 2nd in Australia, on August 9th in the Czech Republic, Slovakia, the Ukraine and Turkey, on August 16th in Slovenia and the USA,  on August 21st in Finland, on September 7th in Brazil and Sweden; on September 13th in Hong Kong, on September 27th in Greece, on October 11th in Spain and on November 8th in Argentina.

COSMOPOLIS is rated R and has a running time of 109 minutes.