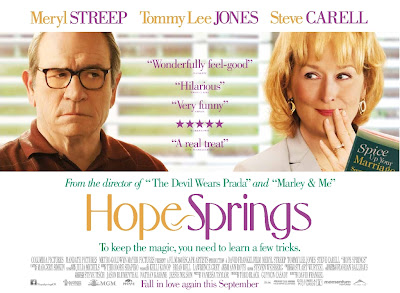 HOPE SPRINGS is an utterly banal, highly disappointing drama about an elderly couple in a sexless marriage going to therapy. Though marketed as a slightly risqué comedy (Meryl Streep suggestively holding up a banana), the movie is actually a very, very talky drama, with most of the 100 minute run-time spent with the two leads (Streep an Tommy Lee Jones) uncomfortably discussing their marriage in front of a poker-faced therapist (Steve Carell).  There are no character-deepening revelations, no telling moments of wry humour - nothing at all to hold our interest in Vanessa Taylor's deathly straightforward script and David Frankel's workmanlike direction.  Given the high-class cast, and potentially fascinating set-up, what a desperate shame!

HOPE SPRINGS is on release in the USA, Canada, Hungary, Israel, Brazil, the Philippines, Australia New Zealand, Croatia, Portugal, Slovenia, Sweden, Argentina, the Czech Republic, Singapore, Ireland, Poland and the UK. It opens on September 21st in Norway, on September 27th in Germany, the Netherlands and Spain, on October 5th in Finland and Turkey, on October 10th in Belgium and France, on October 18th in Hong Kong, Italy, Estonia and Iceland, in Denmark on November 15th, in Greece on November 22nd, in Chile on December 6th, in Russia on December 13th, in Bulgaria on December 21st, in  Macedonia on December 27th, in Taiwan on January 4th, and in Mexico on February 22nd.