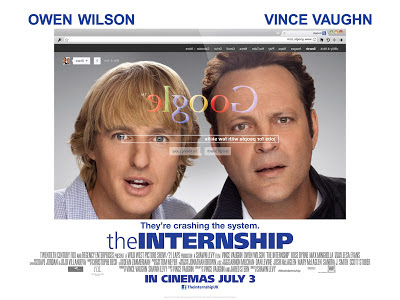 THE INTERNSHIP has a rating of PG-13 in the USA and a running time of 119 minutes.
THE INTERNSHIP is on release in the USA, Australia, Bahrain, Hungary, Lebanon, New Zealand, Portugal, Bulgaria, Estonia, Lithuania, Serbia, Russia, Colombia, Poland and Sweden. It opens this weekend in Belgium, Egypt, France, Bosnia, Croatia, Greece, Israel, Macedonia, Slovenia, Romania, Spain and Taiwan. It opens in the UK, Ireland and Norway on July 3rd; in Denmark, the Dominican Republic, the Netherlands, Finland and Turkey on July 12th; on August 2nd in Mexico and Ecuador; on August 9th in Bolivia and Uruguay; on August 22nd in Argentina, Singapore and Venezuela; on August 29th in Peru and Brazil; in Germany on September 19th; and in Chile and Italy on September 26th.
Posted by Bina007 at 22:12