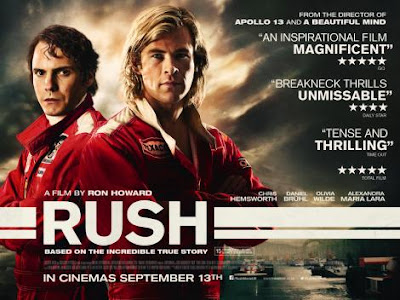 The short version:  There's nothing wrong with RUSH as two hours of good quality entertainment.  It's well filmed, well acted, takes you into the racing circuit with exhilarating speed, and delivers some nicely timed laughs.  But, ultimately, RUSH is a movie made by two people who don't really care about or know about Formula One. It's a movie about two drivers who weren't really rivals, weren't really as important as the movie claims they are, and who were probably more complex than this movie allows them to be.  Save yourself the worry: watch SENNA instead.

The podcast version: You can listen to a podcast review of the movie below or subscribe to Bina007 Movie Reviews in iTunes.


The long version:  Ron Howard, a director of indifferent and inconsistent quality and no discernible style, returns to our screens with his take on the 1976 Formula One racing season, as defined by the intense competition between Maclaren's James Hunt and Ferrari's Niki Lauda. The blunt-talking Austrian, Lauda, had the better car and better technical ability, but British James Hunt has the superstar lifestyle and the raw aggression that made him a fierce competitor, if not for the long haul.  According to Peter Morgan's script, Lauda was jealous of Hunt's playboy charisma, and Hunt was envious of Lauda's respect and settled family life.  This spilled over into such vehemence that Lauda took points from Hunt on a technicality and Hunt goaded Lauda's colleagues into racing a dangerously slippery Nurburgring.  All F1 fans know that this resulted in Lauda being engulfed in flame for a full minute, as his face and lungs burned, and how he forced himself back into the racing car within three F1 races, placing fourth - arguably the ballsiest race run in F1 history.  So much is revealed in the movie's trailers.  But if you really don't know how the 1976 season ended, I'm not going to spoil it here.

There are four problems with RUSH.  The first is that Peter Morgan creates a script that is chock-full of sporting clichés and one-dimensional characters that barely register any kind of character development. James Hunt is the handsome playboy with a heart of gold (witness his beating up of the mean journo who taunts a burned up Lauda).  Lauda is a clichéd rational Kraut.  (And all this while Morgan does the interview circuit complaining about the cultural pigeonholing HE experiences as an Anglo-Austrian.)  It gets worse with the minor characters:  poor Alexandra Maria Lara's sole contribution as Mrs Lauda is to stand around looking concerned at crucial moments, while Olivia Wilde as Mrs Hunt has to look hurt. The only moment of character evolution comes with Lauda in his pivotal Fuji race but that's shown through some pretty cheesy flashback inter-cutting.

The second problem is that the movie is deeply patronising.  And I don't mean it stops every five minutes to give us a Basil Exposition guide to Formula One racing. In fact, US audiences less familiar with this majestic sport might find themselves short-changed on the sport and drowning in melodrama.   Rather, screenwriter Peter Morgan sees fit to give us a final scene between Hunt and Lauda in which they basically summarise all that has just occurred in the last two hours and what it all means for them and, thus, for us.  In a story that is basically very simple* and features very simply drawn characters, this is hardly necessary and underscores the fact that the movie has no real natural end because it doesn't really deal with a real-life proper rivalry.

The third problem with the film is director Ron Howard's inability to focus on the majesty of F1. And yes, I know, the races are well-filmed, and cinematographer Anthony Dod Mantle does a great job with his grass level shots of whirring tires and mist soaked visors, but this movie still plays in the register of cheesy daytime drama.  Just look at the excruciating and unnecessary soft-focus under-water love scene between Mr and Mrs Lauda - pure schmaltz - and inserted, no doubt, too soften the edges of King Rat.

The fourth problem is clearly nobody's fault but bad luck: this movie will, whether it wants to or not, stand in the shadow of Asif Kapadia's peerless documentary SENNA.  And it fails miserably by comparison.  Why?  Here's why.  For a start, Aryton Senna would be in many people's top three of all time great drivers and Prost in the top five.  Lauda maybe makes the top ten, partly because of his miraculous comeback.  It's harsh, but Lauda and Hunt just aren't names to quicken the heart in the way that Prost-Senna do.  And then, to make it even worse, the complexity of the characters portrayed in RUSH don't come close to SENNA.  Aryton is shown to be a conflicted, contradictory, fascinating enigma - deeply spiritual, biblical, but also a playboy.  The ladies man that Hunt was, but also the rationalist, arguing not to race in bad conditions, that Lauda was.  He is more interesting on his own than Peter Morgan's Lauda and Hunt put together, and that's before we get to the amazingly complete driver Prost with his dark relationship to the really sinister FIA chief Balestre.

But even if RUSH had been a fictionalised account of Prost-Senna, it would have still failed because it cannot compete with the real live race footage, the real life exhilaration and ecstasy of Interlagos 1991; the real life sobbing tragedy of Imola 1994.

The conclusion:  RUSH is a movie made by two people who don't really care about or know about Formula One. It's a movie about two drivers who weren't really rivals, weren't really as important as the movie claims they are, and who were probably more complex than this movie allows them to be.  Save yourself the worry: watch SENNA instead.

RUSH has a running time of 123 minutes and has been rated R in the USA and 15 in the UK for strong language, sex and scenes of bloody injury.

RUSH played Toronto 2013 and is on release in the UK, Canada, Israel, Denmark, Hungary, Brazil, Finland and Ireland. It opens on limited release next weekend in the USA, as well as on wide release in the Philippines, Taiwan, Belarus, Croatia, Greece, Italy, Kazakhstan, Russia, Slovenia and Turkey. It opens on September 26th wide in the USA, in France, Bahrain, Kuwait, Oman, Qatar, Macedonia, Singapore, the UAE, Canada and Venezuela. It opens on October 3rd in Belgium, Australia, Germany, Lebanon, the Netherlands, Serbia, Norway and Sweden. It opens on October 10th in Hong Kong; on October 17th in Peru; on October 18th on Mexico and in February in Japan.

*Two formula one racers compete - one hot-headed one rational.  The rational one has a severe accident partly because of the goading of the hot-headed one but their rivalry helps him overcome his injury to race again.