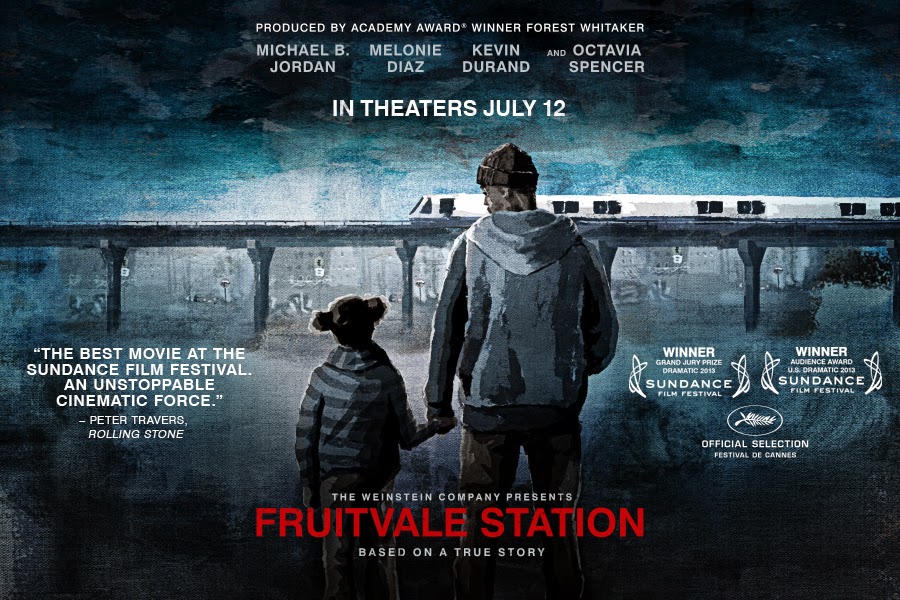 Oh dear. The poor women next to me was in floods of tears and actually apologised for crying to me when the lights went up.  This may well be a peculiar trait of the English: apologising for a visceral emotional reaction.  I rather gather that this has been the response of the majority of viewers of FRUITVALE STATION - the critically acclaimed debut feature from writer-director Ryan Coogler. He has evidently made a deeply-felt earnest and politically charged film, and audiences are responding in kind.  After all, who can't feel sorry for a charming, fallible, but loving son, boyfriend and father who, through no fault of his own, ends up getting shot by a policeman at the metro station that gives this film its title.  The real Oscar Grant didn't deserve to die.  But he also deserves a better film than this piece of emotionally manipulative hagiography.

Ryan Coogler's conceit is to give us the man on the day before he died, enlightening only with a flashback to his time in prison and his beef with a fellow prisoner.  We see Oscar as a loving if occasionally unfaithful boyfriend, raising his daughter Tatiana responsibly, and supported by a loving extended family. It's certainly a far cry from the cliche of young black men raised by single mothers, ditching their multiple baby-mamas and up to no good.  To be sure, he's done time, and he has a cowardice when admitting to his family and friends that he's lost his job, but deep down we know Oscar is a great guy.  Why? Because he helps a pregnant woman take a leak and cradles a dying dog.  The problem is that this is a whitewash. The incident with the dog just didn't happen, and other factors we should have known about aren't mentioned.  Most crucially, the way the movie wraps up leads the audience strongly to believe that Oscar was deliberately shot by a racist cop, when the truth could be that it was just an honest mistake. Who knows?  The point is that the film doesn't admit of an alternative narrative and in doing so becomes trite propaganda.

Okay. So what if we were to approach this film as fiction and ignore any attempt at veracity, how does it work as pure drama? The opening shot of found footage showing a young man brutally treated on a metro platform is powerful and throws us into the action.  The opening scenes of the movie give us a character sketch of his relationship with his girlfriend that is deft and interesting. But then, as he roams around for the day getting ready for his mother's birthday party the movie loses pace and interest. We are marking time, hungry for character development.  The set piece confrontation at the metro station is brilliantly tense and horrific, if one can draw oneself back into the film, but just as you think "this is a tremendous movie" it descends into hackneyed E.R. territory and then into its politically simplistic ending.  So, a movie that doesn't quite cohere - that doesn't quite convince - hanging on the shoulders of a masterful set piece. A tremendous waste.

FRUITVALE STATION has a running time of 87 minutes and has been rated R in the USA and is rated 15 for strong language, violence, and injury detail.

FRUITVALE STATION played Sundance 2013 where it won both the Best Drama and Audience Award and Cannes where it won the Un Certain Regard - Avenir award. It also won the Independent Spirit Best First Feature Award. It opened last year in the USA, Singapore, Greece and Turkey and opened earlier this year in France, Denmark, the Netherlands, Sweden, Belgium, South Korea, Portugal, Brazil, Italy, Japan, Hong Kong, Taiwan and Germany. It opens in the UK and Ireland on June 6th.
Posted by Bina007 at 10:44