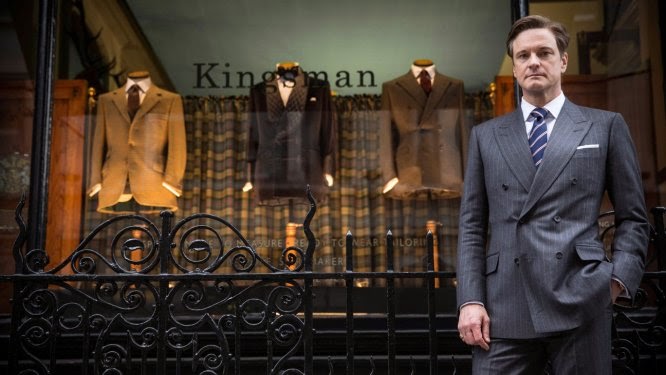 You can listen to a podcast review of KINGSMAN here or subscribe to Bina007 Movie Reviews in iTunes:

What exactly is it that Michael Vaughn wants to do with KINGSMAN?  Is he trying to make a didactic film about class and style?  Is he trying to remake the vintage bonds for a new audience? Or is he spoofing them?  The difficulty of working out what's going on makes KINGSMAN sporadically entertaining but ultimately dis-satisfying and occasionally baffling.

The conceit of the movie is that the Kingsman are an elite spy organisation run in the interests of the public good, above and beyond corrupt governments. A Kingsman agent Harry Hart (Colin Firth) sponsors a young kid called Eggsy (Taron Egerton) into a competitive entry test to become a Kingsman.  He isn't as posh as the other entrants, but Harry reassures him that to be a gentleman is about manners rather than breeding.  In the process, Eggsy becomes an active spy trying to bring down the evil super villain slash internet billionaire Valentine (Samuel L Jackson) with the help of the Kingsman's tech specialist Merlin (Mark Strong).


The first two thirds of the film work as a kind of mix between an old-fashioned camp Bond film and The Krypton Factor.  There are secret lairs, clever gadgets, evil villains and physically bizarre side-kicks.  There's also a didactic tone from Vaughn and graphic novelist Mark Millar.  We learn that they long for the days when movies were fun, rather than earnest, dull reimaginings (CASINO ROYALE and BATMAN BEGINS we're looking for you).  We also learn that they are hypersensitive to class privilege, a peculiarly British concern, and one I suspect will not play as well abroad. It's also bizarre that a movie striving to be so politically correct on the class issue could have such retrograde sexual politics.  And no, I'm not referring to the obviously crass joke at the end, but the typical movie trope caring, supportive female agent with zero personality (Sophie Cookson's Roxy).

Still, for the first two thirds of the film, I really did find the movie fun.  It had a lovely lightness of touch and a half-way-mark action sequence was just jaw-droopingly audacious in its choreography and sustained effect.  But as we moved into the final third of the film it crossed the line from homage to spoof, becoming ever more ridiculous and puerile, resulting in a final scene at the evil lair that's quite literally cartoonish.  All of which is a great shame because I'd just become engaged with Eggsy and his journey from tearaway to secret agent.   Taron Egerton is an engaging actor and it's a shame he couldn't have kicked off a genuine new Bond-style franchise rather than being pulled into a cheap spoof.

Here's the thing. I completely agree with Matthew Vaughn. I hate all these over-wrought comic book adaptations that suck the fun out of the source material. I don't want Bond to be bleak, I want it to be camp.  If I want a well-written spy novel I'll read John le Carre.  I just wish that instead of making a movie that takes the piss out of Bond and moans about how dull current spy films are, he'd actually just made a new, brilliant, fun spy movie.  Show not tell Matthew: words for a gentleman to live by.