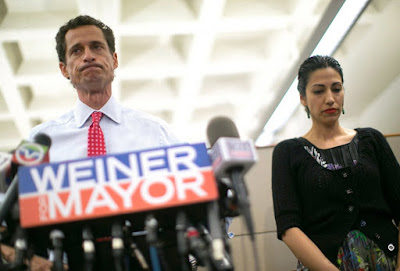 The directors - Josh Kriegman and Elyse Steinberg - were invited by Wiener to document his run for mayor once the dust had settled on the initial scandal. He's firmly marketing himself as a transformed man, and central to that is his beautiful and intelligent wife Huma Abedin - herself a top political aide to Hillary Clinton - and their cute young son.  The cameras are granted hugely intimate access of the couple raising funds, on the campaign trail, committed to their marriage, and refusing to let a moment's madness deny the country of a passionate advocate for the underdog. And certainly, the video footage of Wiener pugnaciously defending Obamacare and other progressive causes in Congress and on TV, you get the feeling that, yes, let's do this.

What is dramatically more interesting is what happens when the second sexting scandal breaks.  At first there's some jesuitical arguing over the timeline - did it happen before or after he said he reformed?  Apparently, WHILE he said he was reforming.  There's the ridiculousness of the avatars of the people involved - Wiener calling himself Carlos Danger, i-messaging his penis to a young woman who will go on to take the porn star name Sydney Leathers.  Her motive seems at once to expose this hypocrisy but also to make some phat cash. And why not?  Wiener himself seems no less ambitious in the pursuit of what he wants.

But what does he want? This documentary is amazingly restrained in making its own judgments but the evidence of high-level narcissism and an under-dog complex is compelling.  Wiener likes being in a corner punching back.  There's a sense in which he might have subconsciously done something so stupid in order to fight back from it.  When confronted with the idea that he is mentally obsessive on a TV show he lashes out at the admittedly obnoxious interviewer but goes home to watch it again and again. He is clearly impressed by his reaction and truly believes he's come off better than the interviewer.  His wife looks on aghast and walks out. In a rare intervention the documentarian asks if she loves him because of his pugnaciousness and he covers his face and says she loves him in spite of it.  It's a rare moment of insight from a man so obsessed with the narrative of his "won't back down" comeback he cannot bring himself to see the disgust and shame on his wife's face.

If Wiener's motives are a huge part of why we are endlessly fascinated by this subject, then Huma's motives in standing by her man are equally fascinating. Moreso because we know she works for Clinton, perhaps the most famous political Good Wife of them all.  She takes her first press conference in her husband's defense but the body language and facial expressions say it all.  Is this a political deal - they have to stick together to ride out the rough times and still gain power? Is it about the child? Huma doesn't reveal anything and indeed, as the race for Mayor tanks as the scandal explodes, she increasingly absents herself from his campaign.  Nonetheless, neither she nor Wiener call of the documentary crew.  I'm not surprised about him because he seems fairly comfortable being at the centre the spotlight, even for negative reasons. But I am utterly surprised she allowed filming to continue.

Whatever their respective motives, WIENER is a fantastic documentary - intimate access, a great and breaking story, complex and fascinating characters - and a side comment on the voracious appetite of modern media culture, including the viewers, for this kind of notorious story.  Hugely compelling and worth watching even if you've never heard of this politician before.

WIENER has a running time of 96 minutes and is rated R.  The movie played Sundance 2016 where the directors, Josh Kriegman and Elyse Steinberg, won the Grand Jury Prize - Documentary. It went on limited release in the USA earlier this year and is currently on release in theatres and on streaming services in the UK and Ireland.
Posted by Bina007 at 12:37