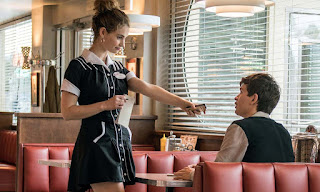 The conceit of the film is that it's young protagonist "Baby" was involved in an horrific car accident as a child that left him scars and tinnitus;  a love of old-fashioned ipods stocked with great music; and a gift for both boosting and driving cars.  This leads him into debt with a local gangster who exploits his unique talents as a getaway driver, for a different crew every heist.

Naturally, this leads us into the territory of derivative genre-tropes.  Kevin Spacey's "Doc" is a cool calm business like crime boss straight out of a Tarantino movie, and the kooky collection of colourfully nick-named thieves are similarly Tarantino-esque.  Ansel Eglort's Baby is the classic good guy in a bad situation, doing that One Last Job before his debt is cleared, but like Al Pacino in Godfather 3, pulled back into a life of crime that wears him down.  And Lily James' diner waitress Debora is nothing more than a pretty vacuous heart of gold character upon which Baby can fashion his dreams of escape.

So why is this a good movie, despite the inevitability of the plot and the comic book exaggeration of the characters? Two things.  The first is the casting of Jon Hamm as one of the thieves who goes from basically easy going and cool to batshit angry and menacing over the course of the film. It's a truly gonzo performance and makes the film.  The second is more holistic - it's Edgar Wright's supremely skillful choreography and direction of each and every car chase.  Every single song choice is spot on - and every beat and lyric is perfectly matched to a screeching tire, or a character's actions - in a way that's breathtaking and demands a second, third and fourth viewing.  It's this profound synchronization that makes this film unique and stunning.   I also want to give Edgar Wright props for having a moral centre to a film that could've just been a stylish film that relishes violence.  Time and again he subtly moves the camera away from showing a violent act, and yet we absolutely see the emotional and indeed legal consequences of that violence.  This is sadly highly unusual.

BABY DRIVER has a running time of 112 minutes and is rated R.  The movie is on release in the USA, Canada, UK, Ireland, Denmark, Hungary, Israel, Netherlands, Estonia, Lithuania, Romania, Turkey, Vietnam, Spain, Poland and Switzerland. IT opens on July 13th in Australia, on July 20th in France, New Zealand and Singapore, on July 27th in Sweden, Argentina, Brazil, Czech Republic, Germany, Slovakia, Austria and Bulgaria, on August 3rd in Portugal, on August 11th in Chile, Finland and Norway, on August 17th in Philippines, Greece and Cambodia, on August 19th in Japan, on August 24th in Belgium, Croatia, Kuwait and Russia and on September 7th in Italy.
Posted by Bina007 at 23:56