MARK FELT: THE MAN WHO BROUGHT DOWN THE WHITE HOUSE 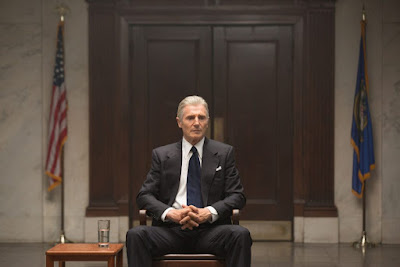 The resulting film is a handsomely shot and acted, compelling drama about a loyal man pushed to protect the integrity of his institution at great personal risk.  That said, he is also shown overstepping the mark in illegally wiretapping in pursuit of a terrorist group.  But overall, we are rightly meant to see Mark Felt as a hero. I loved the shooting style - Washington as a grey town full of grey men in grey suits.  I loved the subtle power plays - men overlooked for promotion - the flexing of political muscle. And I loved that Landesman allowed Felt to look compromised. Yes, he is doing something noble, but is there also a tinge of revenge against the man who got the job he wanted? This is truly nuanced and intelligent film-making and a must-see for all Watergate obsessives.