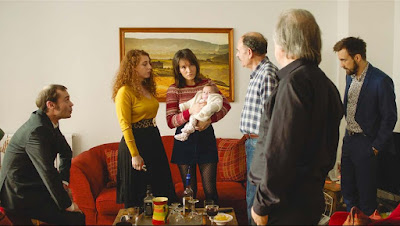 GLORIA MUNDI is another in a long line of French social realist director Robert Guediguian's Marseille-set Marxist dramas. In this one, he's trying to tell us how modern life crushes the honest worker's hopes and dreams, leading them to crime out of desperation.  This is illustrated through the life of the family pictured. Mum is a cleaner, locked out of earning a wage because of a strike.  Dad is a bus driver, on suspended leave because he was caught using his mobile phone while driving. The elder daughter is a feckless millenial who can't hold down a job as a sales assistant.  The son-in-law is an Uber driver beaten up by conventional taxi drivers scared of the competition.  Ranged against these unfortunates is the younger half-sister and her husband - clearly depicted as front men of evil nasty capitalism. They run a pawn shop, and view their family as losers.  And entering the picture as a kind of catalyst to the story, are the elder sister's baby Gloria, and her ex-con grandad newly out of prison: a silent solemn presence.

The film is well-acted and despite its heavy-handed politics and an obvious plot worthy of a cheap British soap opera, it did hold my attention. There are a couple of set pieces that are truly affecting. One is a scene where the nasty capitalist daughter forces an obviously distressed Muslim woman to remove her veil in order to sell her toaster for five euros. That's nasty and powerful. I also really liked the depiction of the parents marriage - loving and secure, so secure that the dad and the ex-con can form a kind of friendship, jointly caring for their gran-daughter.

The problem I had - apart from the obvious plotting and pretentious opening and closing scenes - was that the anti-capitalist message was badly executed.  These people are in trouble because they do stupid, sometimes illegal, stuff, and are rightly punished. Don't use your phone while driving - don't chat to your mum when you're meant to be working - don't start a fight.  And seeing the parents try and bail out their narcissistic irresponsible daughter again and again suggested to me that the message of the film was really to admonish Boomer parents from over-indulging their kids.

GLORIA MUNDI has a running time of 106 minutes and had its world premiere at the Venice Film Festival.
Posted by Bina007 at 12:28