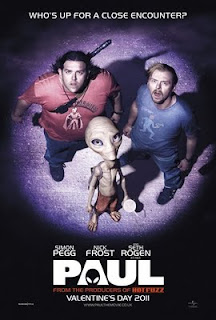 What is it about British comedians that they go to America, garner a little success, and then get the urge to mock the key difference between America and Britain - Christian fundamentalism. Don't get me wrong - people who believe in Intelligent Design give me the heebie-jeebies - but there does seem something rather odd, and pathological even - in these movies that delight in undermining religious belief. I speak here of Ricky Gervais' THE INVENTION OF LYING and, now, Nick Frost and Simon Pegg's new film, PAUL.

The plot is simple.  Frost and Pegg play two best friends and sci-fi geeks who attend a convention in the US. They pick up an alien who needs to get home, voiced by Seth Rogen, and so set up a comedy road-movie that could've been a clever satire on genre films, just in the same way that SHAUN OF THE DEAD brilliantly spiked zombie movies, or HOT FUZZ spiked cop films.  But  no, Frost and Pegg add a fourth character to their movie - a religious fundamentalist (Kristen Wiig) whose entire world-view is over-turned by her realisation that there is life on other planets.

Of course this could've been as funny as anything in HOT FUZZ or SHAUN, but somehow - maybe the sensitivity of this material in the US, or maybe the real Hollywood money behind the picture - dulled their wit. (Or maybe it's that Frost and Pegg are without their usual collaborator - Edgar Wright?)  There are still flashes of the kind of ribald, laugh-out-loud comedy that we got in the earlier films, but overall this seems like a much tamer, and less memorable affair.  That unmistakeable damp squib sensation that settles in at about the hour mark isn't helped by a rather flat cameo by Jason Bateman as the spooky Fed, and can't be saved by a cameo from Sigourney Weaver. I also feel that Seth Rogen is straying into the territory occupied by Jack Black - that of always playing himself - even when voicing a CGI alien.

PAUL was released earlier this year in the UK, Ireland, Belgium, France, Canada, the US, Belarus, Kazakhstan, Russia, the Ukraine, Australia, Croatia, Germany, the Netherlands, Estonia, Hungary, Malaysia, Singapore, Iceland, Italy, the Philippines, Denmark, Finland, Norway and Lithuania. It is currently on release in Sweden, Thailand and Turkey. It opens in Spain on July 22nd.