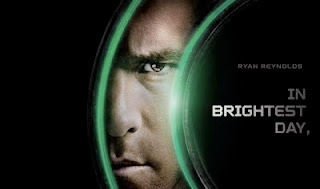 The Green Lantern strikes me as a remarkably anachronistic, even parochial, name for a superhero, considering that it's meant to have been invented by a bunch of super-intelligent Nietzchean aliens, who police the world with their Green Lantern corps officers powered by the energy of Will. I mean, can we take seriously any super-hero who has a magic ring (my precious!) powered by an old-school lantern - whose special power is basically manifesting his imagination as kids toys and power-tools? A superhero so crappy that his friends see right through his mask to his real identity? A superhero whose evil nemesis is basically a mean-looking Cloud, and whose human enemy basically looks like a weedy version of The Elephant Man? Colour me unimpressed.

And what can we say about the translation from comic book to screen? Well, sadly not much. Ryan Reynolds is certainly buff, but the screenplay doesn't take advantage of his talent for comedy, or of his genuine acting chops, as last seen in BURIED. Blake Lively, so impressive in THE TOWN, is limpid as his love interest, Carole Ferris, and about as believable as a test pilot as Jessica Biel in STEALTH. Tim Robbins is a caricature, Angela Bassett is under-used, Mark Strong, as Sinestro, looks like some camp Flash Gordon throwback, and as for Peter Sarsgaard as The Elephant Man, full marks for effort, but he chews up the scenery like he's in JURASSIC PARK.

GREEN LANTERN fails on every level. The plot is simplistic and predictable; the acting wooden; the special effects goofy (despite alleged millions spent on the CGI green suit); the action set-pieces unengaging. I didn't give a crap about any of it. And the tragedy is that we KNOW all these actors can act, and we KNOW, having watched X-MEN:FIRST CLASS, that origins movies that grapple with big ethical questions about the use and abuse of superpowers can be genuinely profound. I blame Martin Campbell, sometime BOND director. He looks like he was overwhelmed by his first big CGI action block-buster, and never really had the balls to bring some subtlety to the script. And the depiction of both the aliens and their perfect planet also looks like a lo-rent throwback - production design so goofy and unimpressive that kids were laughing at the alien Guardians in the screening I attended.

GREEN LANTERN is on release in the UK, US, New Zealand, Belarus, Hong Kong, Kazakhstan, Kuwait, Malaysia, the Philippines, Russia, Singapore, Slovenia, Thailand, Canada, India, Ireland, Poland and Qatar. It opens on June 23rd in Armenia, on June 30th in Argentina, on July 17th in Azerbaijan, on July 22nd in Japan and on July 29th in Belgium. Germany, Estonia, Spain and Sweden. It opens on August 5th in Australia, the Netherlands, Finland and Norway. It opens on August 10th in France, on August 11th in Hungary, on August 19th in Brazil, Colombia, Paraguay and Portugal. It opens on August 26th in Turkey and on August 31st in Italy.