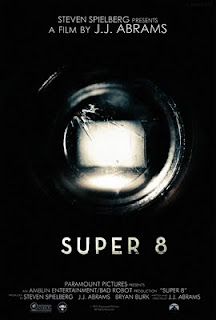 SUPER 8 is a supremely self-indulgent movie, and whether or not you enjoy it depends on how far you share the nostalgia of the film-makers. Writer-directer J. J. Abrams and cinematographer Larry Fong grew up in the 1970s, making amateur genre movies on Super-8mm cameras, and obsessing over the movies of Steven Spielberg, whose movies were themselves self-indulgent. After all, take away that sense of visual wonder - the spaceship in E.T.; the pirate ship in THE GOONIES; the effects work in CLOSE ENCOUNTERS - and every Spielberg film is basically the same. They are movies that document the struggle of kids growing up in working-class middle-America in an era when mum and dad are divorced, both parents are at work, and the kids are pretty much left to their own devices. The world of Spielberg is full of peril, but the plucky kids always pull through thanks to friendship and smarts. And when they do, well, their previously uncomprehending, distant parents show up with a big hug and a few tears. These are movies of alienated children creating a sense of family where there was none: through their friends - and finally by forcing their parents to notice them. The aliens, the sharks, the pirate ships - these are basically just super-dramatic MacGuffins.

Of course, every genre film has its subtext. Zombie movies from the 60s and 70s are really depicting society's fears of Soviet infiltrators, or the rise of consumerism. So it shouldn't be surprising to find that E.T. is really about divorce. But what I do resent is how Spielberg allows what should be sub-text to dominate his movies. I don't mind it getting a little dusty in the cinema at the end of a movie but I do resent the infantilisation of the audience that characterises his work and the emotional manipulation that swamps the final act in every Spielberg movie - and absolutely ruins A.I. This is, after all, the director who felt it necessary to pick out a little girl being swept into the Warsaw Ghetto in a red coat - as if the tragedy of the Holocaust were not enough. The audience had to be directed to the tragedy. The result is that SCHINDLER'S LIST - in some ways an admirable film - is irredeemably kitsch.

All this may seem a little off the point, but once you understand that SUPER 8 is a love-letter to Spielberg - not a pastiche, but often containing elements of pastiche - it makes more sense. J.J.Abrams and Larry Fong want to take us back to their childhood - to create that same sense of wonder at the magic of celluloid - to a time before the meaningless CGI and fatuous camera angles of Michael Bay. The nostalgia is even wider. The opening shot shows us a sign in an "employee-owned" steel mill - and the film-makers want us to appreciate that this was an era where America made things; where greed wasn't good; where gas was cheap; towns were communities; where kids still called adults Mr. and Mrs; and the most trouble you could get into was to smoke a little pot. In essence, J.J.Abrams and Larry Fong are taking us back to an era before irony and slick production values. Maybe that's why Abrams directorial style (insofar as he has one outside of making Spielberg flicks) is creating lens flares. Lens flares are typically seen as a mistake - as amateur - as something to be avoided. But according to an interview in American Cinematographer magazine, for Abrams "Flares can be purposeful and addictive, and at the right time they remind me, in a good way, that I'm watching a movie. It doesn't take me out of it. I think it draws me in deeper." In other words, Abrams is in love with cinema, and he wants to be reminded that he's watching a movie every once in a while. He is in love with his childhood and he wants us to be too.

The movie takes place in the 1970s in Spielbergian mid-town working-class America. A bunch of school-kids are making a Super-8 zombie movie, sneaking out to film late at night. They witness their school science teacher deliberately derail a military train - an event that triggers their town being taken over by sinister military types looking for the train's cargo - cargo that is messing with the town's electricity, scaring its animals, wreaking havoc with its machinery and abducting its people...With so much real-life Area-51 type activity, the kids at first treat it all as a great opportunity to film some real-life special effects, but when their friend Alice goes missing, the adventure really begins.....

When the film works best, it's showing us the wonder of kids obsessing over celluloid. You get a real sense of camaraderie and fun from the young ensemble cast, and I particularly loved the soft satire of directorial obsession that is Riley Griffiths' Charles asking the photo-developer for a rush job (three days!) and screaming "production values". I also loved the nascent love story between young Joe (Joel Courtney) and Alice (Elle Fanning). The gory special effects are fun - Larry Fong obviously had a lot of fun re-creating the amateur look of the kids' Super 8 film (shown over the credits) - and Ryan Lee as the pyromaniac Cary pretty much steals every scene he's in. J.J.Abrams does a great job in keeping the monster off screen for as long as possible, building up tension, and Larry Fong brilliantly recreates the look and feel of both CLOSE ENCOUNTERS.

But the film is let down by its need to recreate the emotional schmaltz of a Spielberg film. I understand why Joe's bereaved father, deputy Jackson (Kyle Chandler) is distant from his son. But poor Ron Eldard didn't have any time or room to establish why Louis Dainard was such a drunk, why he was so mean to his daughter, Alice, or why he improbably became so caring by the end of the film. Worst of all, I felt it was rather too convenient that anyone who touches the monster creates a "psychic connection". That convenient little plot device allows for a last-act redemption and touchy-feely blast off that is utterly emotionally unearned. The overall verdict is the same as for any Spielberg flick - great camaraderie among the kids, and amazing visual effects - but all ruined by improbable reconciliation and schmaltz at the end.

SUPER 8 was released in June in Australia, Hong Kong, Malaysia, Singapore, Thailand, the USA, Ukraine, Canada, Taiwan, Vietnam, Belarus, Greece, Hungary, Kazakhstan, Kuwait, Russia, South Korea, Bulgaria, Estonia, Lithuania, Poland, Qatar, Sweden, Turkey, Armenia and Japan. It was released n July in Israel, Belgium, Denmark, Portugal, Finland and Norway. It was released this week in France, Switzerland, Germany, Ireland, Mexico and the UK. It goes on release next week in the Netherlands, Brazil, Colombia and Paraguay. It will be released in Spain on August 19th and in Italy on September 9th.


Comment by Blog Contributor Daniel Plainview: Let's be honest about it - it was a piece of fluff fan-fiction BMX-ing late 70s homage to big Steve. But having said that, it was fun while it lasted. You wouldn't touch it with a barge pole on DVD, for all the reasons you've stated. But spending a tenner and seeing it at the cinema was inoffensive, fun, and stupid at the same time.