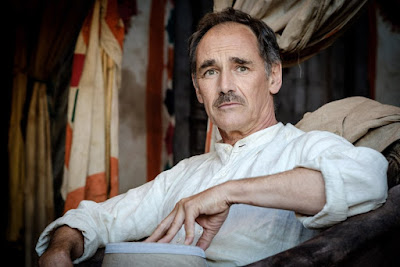 Ciro Guerra (EMBRACE THE SERPENT) returns to our screens with his first English-language film, based on the famous fable by JM Coetzee, and adapted by him for the screen. When Coetzee wrote Waiting for the Barbarians, it was in the context of Apartheid era South Africa, and it was fascinating to see how this provocative, political author would adapt his fable for an era, forty years later, where apartheid is over, but fear of the Other is once again dangerously real.  What he does is take his fantasy world and create something that is outside of place and time but feels more global in its reach.  The film is set in a dusty colonial outpost that feels from its costumes and customs as though it might be in the early 1900s - maybe at the time of the Boer War. From the location and food and dress, it feels like this outpost might be in North Africa rather than South Africa.  But the Others are not Africans but rather Central Asian nomads. In that sense, this nowhere place is a microcosm of the world, with small-minded white people divided between those superficially at peace with immigration and cultural diversity - and those that are violently opposed to it.

The former position is embodied in the calm, gentle, laconic figure of the Magistrate, played by Mark Rylance.  He seems to drip with compassions and decency and gently holds the balance between the colonists and the natives, highly self-aware that he is trespassing on their land.  The latter position is embodied by Johnny Depp's Colonel Joll - and later by his sidekick Mandel (Robert Pattinson).  Both men play their characters as brittle, humourless sadists, relishing their roles in fabricating a border threat, and then ruthlessly torturing the nomads who wander into town.

Of course, the point of Coetzee's book, and this faithful, visually stunning, beautifully acted, slow-burning adaptation - is to ask just who the barbarians are.  The magistrate hints that for the nomads, it's the colonists who are the barbarians, coming into their land, raping and pillaging.  He also shows how under the pressure of an aggressive policy toward the nomads, it's the colonists who become the barbarians - eventually looting and desecrating their OWN town.  Which isn't to say that the nomads don't commit their own act of atrocity, but only when highly provoked.

The most fascinating part of both film and novel is, however, the character of the Magistrate, and how far his liberal earnestness is also both delusional, and masks complex and troubling attitudes toward the nomads.  He takes pity on a nomad woman (Gana Bayarsaikhan) who has been tortured.  It becomes evident to us and to his maid (Greta Scacchi) that the Magistrate has a really weird and borderline sinister attitude to the woman.  He seems to objectify and fetishise her, and wants her to love him, even though his attentions clearly creep her out. How absurd, and thoughtless, and insulting, that he would even consider she might stay with him in the very place where she was viciously abused?

And so, the most fascinating part of this film is the question it poses to those of us who think we're on the liberal progressive side of the debate - what are the unconscious ways in which we are no better than the more obviously prejudiced people around us?

This makes for a gripping and thought-provoking film, but it's worth pointing out that it's also visually stunning. From Chris Menges' cinematography in the North African desert, to the scenes of an almost Western nature, when the Magistrate goes to return to the girl to the nomads - to the wonderful costumes that hint at different periods. The score - from composer Giampiero Ambrosi - is also superb, and helps subtlety painfully ratchet up the tension as we enter the second hour of this contemplative piece.

WAITING FOR THE BARBARIANS has a running time of 112 minutes. The film played Venice and will play London 2019.  It does not yet have a commercial release date in the USA or UK.
Posted by Bina007 at 07:38