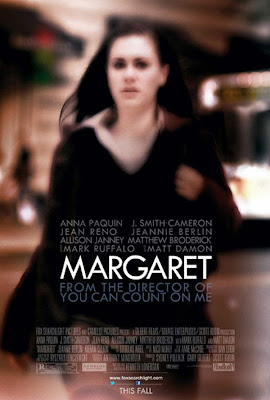 Kenneth Lonergan’s long-awaited follow up to YOU CAN COUNT ON ME has – after a four-year-long editing squabble, and a final edit by Martin Scorsese and Thelma Schoonmaker – finally been released. It seems to attract considerable attention among a British audience - a diverse crowd filled the outdated screening room at the Odeon Panton Street just off Leicester Square on a recent Sunday afternoon to watch the GANGS OF NEW YORK writer’s contemporary take on Upper West Side city life. MARGARET is a daring coming-of-age tale that lets the 17-year old Lisa (Anna Paquin) become witness of a traumatic accident that proves to be formative on her young life. During the 2.5 hours of the final edit we watch the different emotional states the troubled teenager goes through during her rite de passage of becoming an adult. The woman who got rolled over by a bus after a quick meeting of the eyes by its driver with Lisa, is a sacrificial victim to the development of the main character, who, in turn, is searching for different ways to overcome her guilt.

Differing from an American school of teenage drama (Larry Clark & Harmony Korine) that almost solely relies on casual sex and the abuse of illegal substances within a culturally impoverished environment, Mr Lonergan’s MARGARET aims high and interweaves the quotidian, classroom life and family trivia with high brow references. The title is referring to Gerard Manley Hopkin’s poem spring and fall, dedicated to a young child. The outlook therein is bleak:

‘...Ah! As the heart grows older
It will come to such sights colder
By and by, nor spare a sigh
Though worlds of wanwood leafmeal lie;
And yet you will weep and know why.…’

Growing up is not an easy business; plenty of tears will need to flow before a certain level of emotional maturity can be reached.

My take on this film is, furthermore, that it aims to assert the role of so called high culture and allows a largely disenfranchised society to rebuild its values according to those guidelines drawn out by classic drama and poetry, to some extent. The Met plays an important part in the movie. Bellini’s Norma opens her heart to Ramon (Jean Reno), which has a profound effect on his relationship with Lisa’s mother Joan (J. Smith-Cameron). La nuit d’amour in Offenbach’s Tales of Hoffmann triggers the cathartic reunion of mother and daughter. The classroom is a frequent topic, where contemporary politics in the aftermath of 9/11 are juxtaposed with the musings of King Lear. Avoiding the pitfalls of intellectualization, Mr Lonergan does not use those references to show off, or distract from the story he is telling, but just melds them into his trope of big city life.

An ode to New York and its culture it is, but not an unambiguous one.