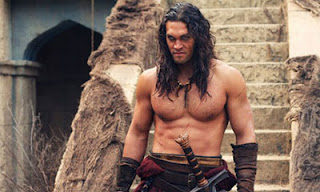 The original Arnold Schwarzenegger CONAN movies, based on Robert E Howard's pulp fiction, were given a kind of grandiose Nietzchean purity of purpose and bleakness of vision by director John Milius. This meant that however ridiculous Schwarzenegger's physique, no matter how absurd the dialogue, they were hard to laugh at, and have become as cult-ish and praised as the source novels.  By contrast, Marcus Nispel's (FRIDAY THE 13th) risible remake is a critical and commercial failure - a movie that is superficial and mindless and hammy.  Most of all, it shows us how much charisma Schwarzenegger had - that while we may have seen him as ridiculous, he never did.  He could stand there, covered in furs with a ridiculous helmet on, and just own the space of Conan. Jason Mamoa, in this new Conan, has the muscles, but not the self-belief. Shorn of Howard's philosophy and Arnie's charisma, the resulting movie becomes a stupid, flaccid piece of sword and sorcery buffoonery - not well thought out enough to be accuses of misogyny - mindless to the point of coma.

The story is simple enough (no excuse, however, for making a mindless film).  Young Conan (Leo Howard) lives with his wise father (Ron Perlman) in a kind of magic-induced pre-medieval Europe of rampaging hordes and fierce warlords.  His family is butchered by Khalar Zym (Stephen Lang), an evil warlord trying to gather the pieces of the Mask of Acheron in order to resurrect his wife, a powerful witch, and rule Hyborea.   Years later, an adult Conan (Momoa) journeys through Hyborea with his friend Artus (Nonso Anozie) and finds himself helping a beautiful princess called Tamara (Rachel Nichols) whose blood is needed for the ritual that will activate the mask.  Thus setting up a final conflict between Conan and Zym, his weird-ass daughter Marique (Rose McGowan).

This film was in development purgatory for nearly a decade, and it shows. It's the unloved ginger stepkid, with directors like the Wachoskis, Robert Rodriguez and Brett Ratner attached. You can see the sliding quality as the film was passed round, and eventually the movie ended up with a relatively unknown horror director and a former music video DP (Thomas Kloss).  Is it any wonder then that the resulting film feels so cheap, so superficial, so ridiculous?  Producers might think that you don't need a great director for pulp material. But I would argue that the more pulpy the material, the harder the director needs to work, the better he needs to be, to prevent the film descending into nonsense.  One can only wonder what voice-over artist, Morgan Freeman, felt when the finished movie was released.

CONAN THE BARBARIAN was released in summer 2011 and is now available to rent and own.
Posted by Bina007 at 19:58