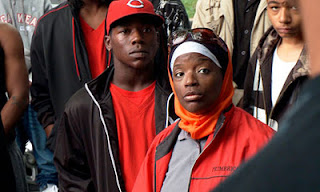 Steve James' (HOOP DREAMS) documentary, THE INTERRUPTERS, is an absolutely fascinating, compelling and politically incisive film about tackling gang-related crime in contemporary Chicago. He shadows volunteers working for a project called CeaseFire - a programme that takes former gang-members and has them "interrupt" violent situations before they happen, trying to talk  kids down from dangerous situations.  Sounds simple enough. But within this simple format comes a nuanced, emotionally affecting exposition of life in deprived inner cities - a film that is as incisive and unblinking as David Simons' superb THE WIRE, but without that show's defeatist message. If there is a "star" in this documentary, then it has to be Ameena Matthews, a former gang-member in the same mode as THE WIRE's real-life Snoop. She has turned her life around, become a committed muslim, but still has that same scary authority that she must have had as a gang leader. She speaks so much sense, so straightforwardly, that you wish her influence were greater, that there were more people like her working the streets. Few Hollywood starts speak with such charisma and authority, and it's her presence that transforms this film from being earnest and didactical into being a genuinely fascinating watch.