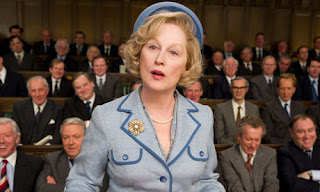 Cards on the table. I grew up in Thatcher's Britain and I am a Thatcherite.  To my mind, she transformed a country that was bankrupt (the IMF had been called in) and crippled by the unions, hamstrung by high inflation and generally down on its heels.  She created an environment in which the ambitious could work hard and prosper, revitalised industry, and won so many of the ideological battles that are now taken for granted in a political system where even the left acknowledges the victory of capitalism over socialism.  That is not to say that Thatcher was faultless.  She also created an atmosphere in the UK which was absolutely poisonous - the early 80s were a godawful time to live in Britain where political battles spilled out onto the streets.  Those of who grew up against a background of the Brixton Riots and the Miners Strike can only look at last summer's riots and find them quaint.  Moreover, the fighting qualities that enabled her to triumph over vested interests in her party and in the country, when fuelled by the adrenaline of her third election victory, led to a kind of hubristic, roughshod rule that allowed the massive miscalculation of the Poll Tax.  And if she was right in criticising the wets, and that treacherous little shit, Geoffrey Howe, she was wrong in underestimating their desire to unseat her.  Still, for all that, Thatcher remains a Prime Minister undefeated in a General Election; a woman who did what she thought was right, not what the focus groups said would be popular; and who left the country prosperous rather than bankrupt.

What was her record as a wife and mother? Frankly I didn't care.  Nor did I view it as something upon which any outsider should be invited to pass judgement. I suppose that, when forced to take a stance, my view of Denis Thatcher is that, much like Prince Philip, he was probably a lot smarter than the Private Eye spoof "Dear Bill" would have him.  And I think the tragically risible public persona of Carol Thatcher, and the nefarious but incompetent activities of Mark Thatcher, say more than anything how neglected and coddled they were respectively. But in all honesty, why does any of this matter?  I was on holiday in Dubai recently and saw an advert for a news programme on BBC World. It roughly went along the lines of "Uprisings in some far away place - George Aligayah will explain what it means to YOU!"  The implication was that in this new post-modern world of "feelings" rather than "thinking" the news only had merit and relevance if it had an impact on MY life. Whatever happened to the idea that great events deserved my attention because they are important, irrespective of whether they affect ME?  When did narcissism and solipsism become the only virtues?

Now, if you've seen the movie THE IRON LADY, and trawled through the previous two paragraphs, you'll see why I despise and discard it.  Screenwriter Abi Morgan (SHAME, BRICK LANE) and director Phyllida Lloyd (MAMMA MIA!) have utterly squandered their opportunity to use Meryl Streep's pitch-perfect impersonation of Thatcher in a movie that shows us "feelings" where it could have given us "ideas" - a movie that shows us a rather anonymous picture of an old lady struggling against senile dementia, when it could've given us a hard-nosed political biography. Whether or  not you love or hate Margaret Thatcher's politics, you cannot but admit that she radically altered the face of Britain, nor that she deserves a serious, cogent and considered evaluation.  But this is a movie about a politician that seems oddly uninterested in her politics. That, of course, is the charitable reading.  One could argue that the movie is too stupid to make an evaluation - too gutless to come down in favour or against - too commercially minded to risk alienating any part of the audience.  As a result, it condemns itself to an alternative purpose - to show the tragedy of an old woman losing her grasp on reality - an altogether more banal enterprise, and one that hardly needs the services of Meryl Streep.

Let me essay briefly how the politics is betrayed. There is no real Edward Heath.  There is no Neil Kinnock. No Gorbachev.  No Nigel Lawson!  Heseltine is a caricature pantomime villain - Richard E Grant is only allowed enough room to characterise him with a badly dyed blonde haircut.  Howe (Anthony Head) is seen as a victim of Thatcher's brutality - but one doesn't come away understanding that it was policy toward Europe that did for him and her - a policy which contemporary events show us was exactly right!  Major events - the Brixton riots, the Falklands, the poll tax - are shown as video montages - there is no colour, no insight.  And the Brighton bombing is used as a tool to show us that Thatcher loved Denis - not as a tool to show us Thatcher's particular reaction to terrorism.  What politics is shown, is the politics of feminism. Again and again, the film wants us to see Thatcher succeeding despite her sex and class. But this is a complete misreading. Thatcher was no feminist.  She did not promote women and far preferred the company of men.  She succeeded because she was talented and expected other women to do the same.

Can one make a good film about Thatcher that has nothing to do with politics? Should one allow for a film to be entertaining even if it utterly betrays the politics of its purported subject? Perhaps. Meryl Streep certainly does a good impression of Margaret, and her ability to convey the younger and older Thatcher is impressive.  Oscar-worthy? Maybe not. I very much liked Alexandra Roach and Harry Lloyd (Viserys in GAME OF THRONES) as the young Margaret and Denis.  And in the later years, Olivia Colman is sympathetic as Carol Thatcher. But these good performances are under-cut by utterly ham-fisted direction. Phyllida Lloyd betrays her origin in directing musicals and opera in how she arranges her characters on screen and where she places her camera.  There are too many shots of people shuffling into parliament, or walking down stairs in parliament, or walking into ornate dining halls, with Thatcher the only woman among a sea of dark suits. Yes, we get it.  Now, move on.  Even better, jog on.  Make room for a better director, one who has the balls to grasp Thatcher's legacy by the throat, and give us the movie we, and she, deserves.

THE IRON LADY is on release in the UK, Australia, New Zealand, Spain, Ireland and in New York and LA. It goes on wide release in the US on January 13th, as well as in Greece, the Netherlands, Canada and Turkey. It opens on January 27th in Finland and Italy; on February 3rd in Hungary, Sweden and Norway; on February 10th in Portugal and Poland; on February 16th in Belgium, France, Singapore and Lithuania; on March 1st in Germany and on March 8th in Denmark and Hong Kong.
Posted by Bina007 at 21:33