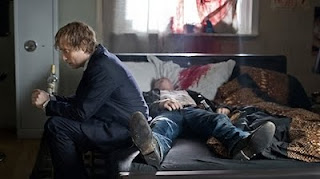 This Norwegian adaptation of Jo Nesbø's popular thriller sets of at a rapid pace but jumps the shark at the thirty minute mark and never regains its credibility. As a result, the final furlong is a dull trawl of a thriller - utterly unthrilling - enlivened only by a moment of emotional reconciliation.

Aksel Hennie plays Roger Brown - a professionally successful headhunter who is so insecure that he moonlights as an art thief to keep his beautiful wife in finery. His life unravels when he crosses path with Clas Greve - a specialist military tracker and former tech-CEO, who also happens to have a priceless Rubens in his flat. (Greve is played by the not unattractive Nikolaj Coster-Waldau - Jaime in HBO's Game of Thrones.) At this point, there is rather predictably a heist that goes wrong. Greve turns out to be sleeping with Roger's wife, and tracking Roger down with guns, dogs and fast cars.

For me, the movie started to go wrong as soon as Roger and Clas had an encounter at a cabin in the woods. Roger just seemed way too resourceful for a pen-pusher - too adept at being o the run. I mean, he's practically Bourne - surviving too easily, too much. And Clas, for a world-class military tracker, just seemed too incompetent, letting Roger off the hook not once but twice. And the foreshadowing is clunky as a sperm whale. Conspirator Ove (Eivind Sander) helpfully describes the many guns in his house as well as some hidden cameras broadcasting straight to his security firm. Do you think they're gonna be important?!

Film critics often get sniffy about remakes. I'm no exception. But after the rip-roaring fun on CONTRABAND (also on release in the UK now, and a far better watch), I can't wait to see the Mark Wahlberg remake of this film. It's bound to be more entertaining.

HEADHUNTERS played Toronto and London 2011. It opened last year in Norway, Finland, Belgium, Sweden and the Czech Republic. It opened earlier this year in Kazakhstan, Russia, Estonia, Australia, New Zealand and Germany. It is currently on release in the UK and Ireland. It opens on April 12th in the Netherlands; on April 27th in the USA; and on August 23rd in Spain.
Posted by Bina007 at 19:33