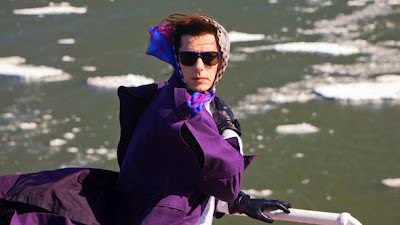 Xavier Dolan's third film is a heavily stylised, histrionic, near three hour melodrama that is impressive in its technical aspects and ambition, but ultimately bludgeons the viewer into boredom.  There came a point when I just couldn't take yet another beautifully framed, synth-track scored, slow-mo shot of one of the leads looking 80s glam and moody.   And I really couldn't take the over-wrought scenes of the two leads arguing that interspersed all the 80s music video scenes.  I think the problem with this film is that it is both stylised AND melodramatic.  Douglas Sirk understood that if the characters are repressed one has to put all of the emotion into the production and costume design, score and shooting style. And in contemporary cinema, Nicholas Windig Refn does the same in movies like BRONSON, which are heavily stylised but have minimal dialogue.  By contrast, a straightforward two-person melodrama can stand to be simpler in its design so as not to totally overwhelm its audience.  In other words, just because you have the sheer talent to do something stunning with the visuals and sound, doesn't mean that that's necessarily in service of the story.

And what is the story?  Laurence and Fred (Frederique) are long-time lovers who have to deal with the fact that Laurence is a trans-sexual. This brings practical problems - he loses his job and is beaten up - as well as the more low-level difficulty of people staring at him in the street.  She tries to be supportive and brave but end sup ducking out into a conventional marriage.  They meet, they talk, they fight - can anything ever be resolved?  Is there a natural ending to this tale of two people in love, but unable to live together?  Writer-director Xavier Dolan, evidently thinks not - so in love with this lead actors' performances and the 80/early 90s kitsch retro styling of his movie. And to a certain extent he is right.  Melvil Poupaud and Suzanne Clement give brave and compelling performances as Laurence and Fred.  For the first 90 minutes or so this film is absolutely captivating.  But as it goes on the performances are drowned (quite literally at one point) in mannered style.  My suspicion is that there is an absolutely stunning 100 minutes movie inside this film, but this edit really just doesn't do it for me.

LAURENCE ANYWAYS played Cannes, where Suzanne Clement won Un Certain Regard - Best Actress, and Xavier Dolan won the Queer Palm., It also played Toronto and London 2012. It opened earlier this year in Belgium, France, the Netherlands and Sweden. It opens in Poland on Nov 9, in the UK on Nov 30 and in Germany on March 13th 2013.
Posted by Bina007 at 18:00