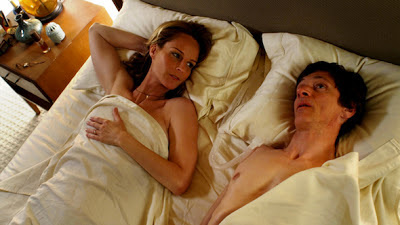 THE SESSIONS is a charming, witty, emotionally affecting movie about a man called Mark O'Brien (John Hawkes) who lived in Northern California in the late 80s.  He contracted polio as a child, and by then in his late 30s, was dependent for life on his iron lung and a series of attendants.  He suffers from muscle wastage and can't use his hands, but has the soul of a poet and superb comic timing. He is also fortunate in his friends - particularly a compassionate priest (William H Macy).  It is a testament to how charming John Hawkes is as O'Brien, that we utterly believe that he could win the love of three women, including the sex therapist (Helen Hunt) who teaches him about his body and how to make love.  It's also testament to this unique and riveting story that the topic never seems prurient, or voyeuristic, or crass.  Rather, director Ben Lewin tackles the issue head-on, with no embarrassment  and utter humanity.

The more I think about this film, the more I admire Helen Hunt for quite literally baring all and bringing integrity and sympathy to a challenging role.  But ultimately, this is John Hawkes' film.  When you consider how he came to our attention as a loveable loser in ME, YOU AND EVERYONE WE KNOW, and then frightened us as a cult leader in MARTHA, MARCY, MAY, MARLENE. and has now transformed into a admirably self-aware flirt, you just have to stand back and admire John Hawkes range and talent.  Maybe this time he'll get the awards season recognition he deserves?

THE SESSIONS played Sundance where it won the Audience Award - Dramatic, and the Special Jury Prize - Dramatic for the Ensemble Cast. It also played Toronto and London 2012. The film will be released on 19th October in the USA, on 8th November in Australia and New Zealand; on 3rd January in Germany; on 9th January in France, Hong Kong and Spain; on January 17th in the Netherlands, Portugal, Ireland and the UK; on 25th January in Norway; on February 14th in Italy and Brazil; on February 21st in the Czech Republic, Iceland and Sweden; on March 6th in Belgium and Denmark; and on March 28th in Argentina. The running time is 97 minutes.
Posted by Bina007 at 15:00