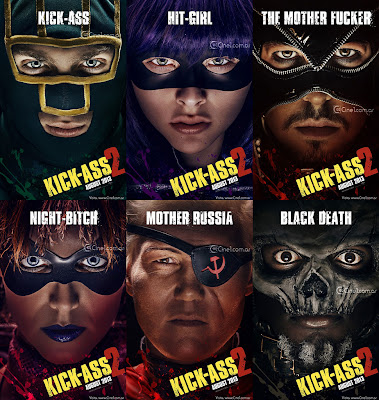 You can listen to a podcast review of this film by clicking here, or by subscribing in iTunes.

KICK-ASS 2 is a movie about two kids who happened to be masked vigilantes, working out whether to turn their backs on a life of danger and try to be "normal". In other words, should they stop subverting justice, stop swearing and stop beating people up?  The movie itself happens to be grappling with exactly the same problem.  And while writer-director Jeff Wadlow has his hero and heroine throw off the shackles of society and embrace their destiny, he himself has the balls of a little girl - well, any little girl except Hit Girl.  Wadlow chokes, giving us the same egregious violence and swearing as the original, but couching every single scene with heavy-handed parental guidance, quite literally giving Hitgirl a swear jar.

The resulting film is not without its fun.  I had a good enough time during its 100 minute run-time. I loved Chloe Moretz as Mindy, struggling with the Mean Girls at school, and spoofing one of my favourite teen movies, FERRIS BUELLER'S DAY OFF.  She steals the show as the teenage girl who gets her first crush, goes on her first date, and puts the mean girls in their place.  Brilliant!  I even liked the nascent romance between Aaron Taylor-Johnson's Kick-Ass and Night-Bitch.  There was a little dust in the theatre when Dave/Kick-Ass faces the consequences of his continued vigilante activity, and I really do want to see what happens to Dave and Mindy in the inevitable threequel.

But most of the rest of the movie falls flat. Ser Jorah Mormont looks completely out of place - far too good/serious a performance - as Chris/Red Mist/The Motherf***er's uncle.  By contrast, Jim Carrey is utterly anonymous as Colonel Star-and-Stripes. In fact, I literally forgot he was in the movie.  And the subversive swearing just seemed gratuitous once it lost its shock value from the first film.

So, overall, a mixed experience.  KICK-ASS is what it is. It needs to stop doubting itself, and pandering to its critics, and just revel in its gonzo madness. Bringing back the original director, Matthew Vaughn, would be a good start.

KICK-ASS 2 has a running time of 103 minutes. It is rated R in the USA, and somewhat generously, 15 in the UK for strong bloody violence, sex references and very strong language.