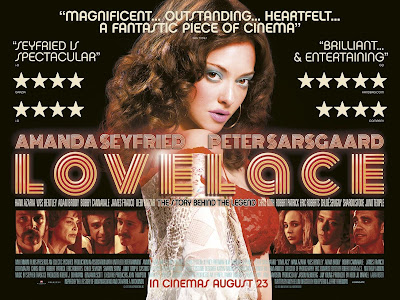 The resulting movie plays as a deeply affecting melodrama.  Amanda Seyfriend is utterly convincing and utterly desperate as Linda. Peter Sarsgaard seems typecast but efficient in his portrayal as Traynor, effectively amping up his performance from AN EDUCATION. The real scene stealer is Sharon Stone as Linda's mother - almost unrecognisable in her ageing domineering prude role. She has very little screen time and has to do some horrible things but we always understand her complicated motivations.  The rest of the cast just feels like a parade of famous faces in over-the-top 70s costumes - and this becomes, at times, distracting. Did we really need James Franco as the Hef, or Chloe Sevigny? As for the direction, other than the conceit of the folded back narrative, it's pretty pedestrian, but I did like DP than choosing to use a kind of sun-bleached 16mm look to give the movie some nostalgia contrasted with the higher-def look of the later "real" scenes.

LOVELACE has a running time of 93 minutes and has been rated R in the USA and 18 in the UK for strong sex and sex references and domestic abuse.

LOVELACE played Sundance and Berlin 2013 and is currently on release in the USA, Canada, Croatia, the UK and Ireland. It opens in Brazil and Taiwan on August 30th, in Estonia on September 6th, in the Netherlands on September 19th, in Denmark on November 21st and in Sweden on November 29th.
Posted by Bina007 at 21:26