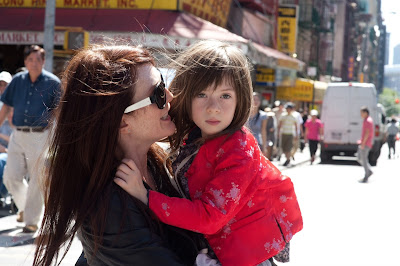 Loosely based on the Henry James novel, directors Scott McGehee & David Siegel (UNCERTAINTY) have created a contemporary tale of the impact of divorce on a small girl in contemporary one-percent New York.  The mother, Susanna (Julianne Moore) is a narcissistic, jealous manipulative fading rock star and the father Beale (Steve Coogan) is a neglectful self-involved businessman. The wonder of the movie is that that the performances are nuanced enough that we do understand that they both love their daughter, even as they literally abandon her.  There's a particularly wonderful scene between Beale and Maisie, where he briefly entertains the idea of taking her with him to England, but Steve Coogan beautifully essays the brief excitement, then practical deflation of that dream. Similarly, there's a stunningly heartfelt scene between Maisie and her mother, where Julianne Moore has to momentarily break through Susanna's possessiveness for a brief epiphany: Susanna has the choice to mess up her daughter's life as she was once screwed over, or to make a better choice.

Where the movie ultimately fails is in its rather fairytale final act.  I believed in the individual characters of Maisie's naive but loving nanny Margo (Joanna Vanderham) and her almost childlike new stepfather Lincoln (Alexander Skarsgard).  I also believed that Maisie's parents would be self-serving enough to marry merely to secure childcare  - a move implicit in Beale's decision to remarry and arguably absolutely explicit in Susanna's.  But where the movie lost me was in Lincoln and Margo's relationship and choices - which seemed trite and convenient where so much else in the movie seemed scarily real, and particular.

Still, kudos to the directors for focussing the film firmly on Maisie - showing these adults merely as conversations, fights and accusations that she overhears or is woken up with.  This serves to give us some sense of the technical masterpiece that is Henry James' short story.  Also, great praise for  the delightful Onata Aprile, who plays Maisie.  There is one place in the film where the tone briefly flirts with deep darkness, and it is here that Onata Aprile proves that she has captivated us.  We feel her peril.  It is a shame that the directors couldn't have stuck to that briefly shown single tear rather than jumping into fantasy schmaltz at the end.

WHAT MAISIE KNEW has a running time of 98 minutes as is rated R in the USA and 15 in the UK. The movie played Toronto 2012 and it opened earlier this year in the USA, Taiwan, Germany, Finland and Denmark. It opened this weekend in the UK, Ireland, Greece, the Netherlands and Australia. It is available to view on demand in the UK.
Posted by Bina007 at 18:26