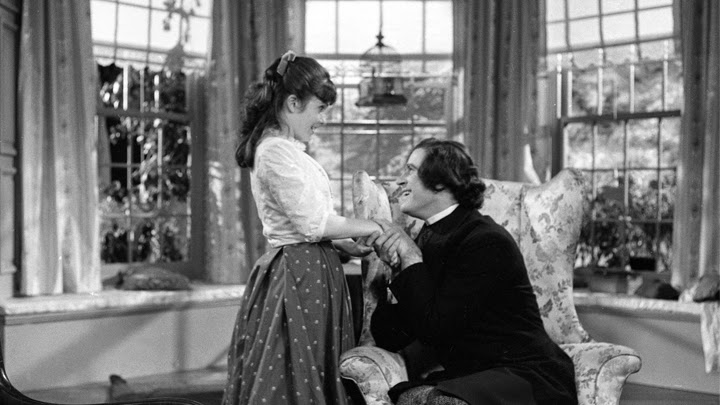 The BFI is putting on a fantastic Dennis Potter retrospective this month, showing all of his TV plays and more besides.  One of the more intriguing offerings was the double screening of ALICE and DREAMCHILD - two versions of the same play, one produced for television in 1965 and the second a feature length film in 1985.  In both, the subject matter is the relationship between Lewis Carroll aka Mr Dodgson, and Alice Liddell, the little girl who inspired Alice in Wonderland.  Whole scenes are carried over from one version to another, although differing performances, editing and context lend them a different angle on the controversial, ambiguous nature of Dodgson's fascination with the little girl.

In the 1965 television play, Carroll is a socially awkward Oxford don, played in almost perpetual angst by the wonderful George Baker (perhaps best known to contemporary viewers as Inspector Wexford from the Ruth Rendell Mysteries.)  Conservative, curmudgeonly, and deeply tragic, Dodgson falls in love with a pubescent Alice, played in almost Lolita like flirtatious fashion by Deborah Watling.  Alice knows her hold over Dodgson and finds him amusing until he's tiring and then patronises with her pretended affect for his stories.  She might almost be too knowing for the story, and certainly by ageing her up, the relationship between the two, while still inappropriate, is somewhat less sinister than in DREAMCHILD.

What we also get in this version of the play is the context of  Oxford politics and Dennis Potter's social criticism of the self-satisfaction of Alice's father, the Dean of the college. Even while her mother (Rosalie Crutchley) becomes alarmed at the love letters Alice is receiving, the father is almost too pitying of Dodgson's awkwardness to put credence in any threat. And so, in a pivotal scene, Mrs Liddell burns the letters while her unthinking husband barely registers the relationship until the book is published. It helps that he's played by David Langton, famous for many as the patriarch in UPSTAIRS, DOWNSTAIRS with all those associations of self-satisfied Edwardian propriety.

The overall sentiment in the play is one of tragicomedy - the poor repressed guilt-riddend don and the sympathetic but flighty girl. There is no real sympathy between the two at the end, and as she dances off into marriage he remains with his puzzles and his stutter and his surreal fantastical tales, so clearly based in academia.  Indeed, it is one of the strengths of this low budget piece that it is forced to ask the viewers to use their imaginations to realise the Wonderland characters. The barest hint of make-up and a backdrop to some elaborate costumes effectively essay the March Hare and the Mad Hatter.

By contrast, the 1985 movie DREAMCHILD has a lavish budget, although lower than the clever production design lets us believe.  The creatures are provided by Jim Henson's creature workshop and have elaborate workings, sinister but somehow less credible than the simple BBC versions.  But then, this is an altogether more opened out piece of work. 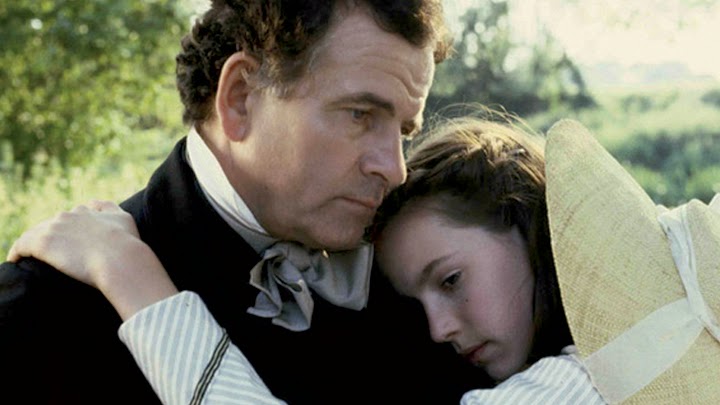 Potter takes the key scenes in Alice's young life but sets them within the context of the real Alice's trip to New York in the midst of the Great Depression to pick up an honorary degree from Columbia on the anniversary of Dodgson's birth. She is a old woman struggling to come to terms with the rapacious commercialism of New York, but also with her relationship to Dodgson, vague memories of which trouble her.

In the movie, Amelia Shankley plays Alice as a pre-pubescent little girl, selfish but lovely, perhaps ignorant of how much Dodgson loves her until a pivotal scene in a dark room. And as she asks herself in old age, if there was nothing wrong with the letters, why did her mother burn them?  The final scene between the two on the riverbank is also different.  Alice's mockery is that thoughtless mockery of a child and the reconciliation less certain. It is only in a coda to the piece, when the old woman has learned to overlook Dodgson's repressed desires and accept his love and his gift of the book, that we can see a true reconciliation.

The other great contrast to ALICE is that DREAMCHILD doesn't show the father - Nigel Hawthorne's performance evidently fell victim to producer Verity Lambert's theatrical cut.  This is a shame because it means that while we have the mother's concerns and a small flashback to her burning the letters, Alice and Dodgson are never in context.  Rather, Potter chooses to give us a rather soupy love story between the elderly Alice's naive companion Lucy (Nicola Cowper) and the suave newspaperman Jack Dolan (Peter Gallagher of THE OC fame).  I'm sure Potter is trying to give us a social critique of the plight of the poor during the Depression or some such, but really it's all very trite.  The only thing it serves it to give elderly Alice a trigger to consider the nature of love.

As for the main performances, Ian Holm's Dodgson is altogether less awkward and guilt-ridden than George Baker's, and therefore more sinister as a result. His final embarrassment on the riverbank isn't as excruciating as Baker's and with Alice so much younger in the movie, his motive's less sympathetic. That darker tone is reflected in production design that is grim and threatening - whether in the driving rain of New York or the sinister seascape inhabited by the mock turtle.  Amelia Shankley is perfectly cast as young Alice, with all the showmanship and self-confidence that one would expect from the rather bossy Alice of the books. Her slow coming to understand Dodgson's love for her is delicately essayed and brilliantly played. I couldn't help wonder how wonderful those scenes might have been if Shankley had played opposite Baker.  And as the elderly Alice, Coral Browne is marvellous - doing a much better job at portraying the stuffy Brit abroad than Emma Thompson in a thematically similar role in SAVING MR BANKS.

Overall, there's something to love in each of these versions and they certainly benefit from being viewed as a pair.  I preferred the more concentrated ALICE to the opened up, creature-effects heavy DREAMCHILD but both gave a sympathetic and therefore provocative spin to the tale of a university don's love for a small girl.