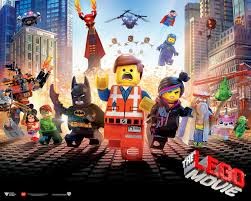 If Marxist theories Slavoj Zizek made an animated kids movie, THE LEGO MOVIE would be it!  It'a audacious in its deep satirical criticism of modern consumer culture - creating an alarming but entertaining picture of a dystopia where people are subjected to an almost Orwellian fascist mind-control - fooled into buying over price coffee, too busy watching mindless TV shows to notice that big corporations rig the elections.  The ultimate irony is that this movie was produced by yet another corporate behemoth, and its gratingly catchy theme song "Everything's awesome" itself became a non-ironic hit, raking in ever more phat cash for President Business at Warner Brothers.

Such a meta-result is absolutely fitting for a movie working on two levels - the lego world and the real world.  In the lego world a no-name schlub called Emmet (Chris Pratt) gets picked up by a Gandalf like prophet called Vitruvius (Morgan Freeman) and told he's the Chosen One! He has a mind so vacant he can get visions that the conventional Master Builders can only dream of, and leave the totalitarian bound proletariat into a brave new world of free-form lego play, defeating the evil boss of Enron, sorry Octan (Will Ferrell) with his sassy sidekick Wyldestyle (Elizabeth Banks) and her A-list douchebag boyfriend Batman (Will Arnett). Meanwhile, in the real world, a little kid just wants to play with his dad's perfectly constructed lego sets - resulting in a cool Neverending Story style interaction between the two worlds.

The politics might be a little hamfisted -  individual creativity is better than slavish corporate uniformity - but the sheer insouciance of the cultural commentary is impressive - as is the quick wit and cheekiness.  I didn't particularly care about any of the characters in this film, but keeping up with the thickly layered comedy was a lot of fun. I don't need to see the film again, but I AM glad I watched it.  The secret of its success is the authenticity of the film-makers' love of lego. What could've been a brand-advertising nightmare is transformed into something nostalgic and light-hearted by the attention to detail - the fond moving of the way in which the lego hair would spin around, the look of lego that's been played with, knocked around and dropped behind radiators - and the revival of key pieces from old sets.  Kudos to Phil Lord and Chris Miller - the guys behind the JUMP STREET reboot - for pulling it off!

THE LEGO MOVIE has a running time of 100 minutes, is rated PG, was originally released in February 2014 and is available to rent and own.
Posted by Bina007 at 15:23