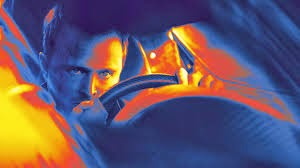 NEED FOR SPEED is so much macho bullshit it makes the FAST & FURIOUS franchise look like the Ingmar Bergman of car-racing flicks.  We're in the sort of clumsy, asinine movie-making that epitomises THE EXPENDABLES except without the self-knowing irony. Some lazy reviewers have argued that you shouldn't expect better from a movie based on a video-game, but that's to do video games a disservice. The simple fact is that ex-stunt driver and director Scott Waugh only knows how to direct by pasting together action set-pieces  and scriptwriters John and George Gatins (REAL STEEL) have either no interest in or no talent for depicting real human emotion.

Instead we get moody silences and an early 80s action flick soft rock soundtrack.  This movie is so bad it should be pastiche.  The only real interest is why Aaron Paul, straight off the success of BREAKING BAD, would choose to make such crud, and why Dominic Cooper and Imogen Poots would collude. And as for Michael Keaton doing a bad Hunter S Thompson impression ....who knows.

The plot, such as it is, depicts a rivalry between street racer Toby (Paul) and billionaire bastard Dino (Cooper).  Dino spikes Toby's care in a race causing a fatal accident, and after doing time, Toby comes out ready to do battle with him in a road-race in California.  The only twist is that to get there he needs to ride across America chased by the police and all the gonzo racers Dino has bribed to take him down.  There's no real answer as to what's behind the rivalry on Dino's part, and Poots as the posh Brit love interest is utterly unbelievable in a film full of unbelievable stuff.  It's just embarrassing.