A MOST VIOLENT YEAR 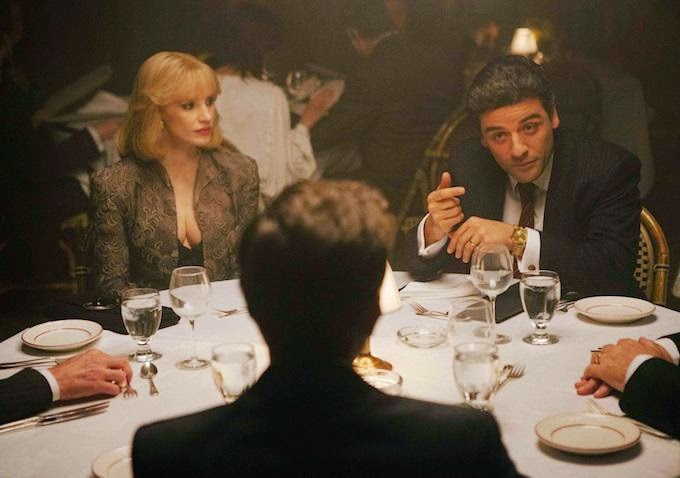 A MOST VIOLENT YEAR is a bad film that could've been iconic - a movie so steeped in cinema heritage that it slides into pastiche - a movie that reaches for greatness but trips over its own shoelaces in a final act that had the audience laughing at it rather than being awed by it.

All of which is a great shame because the writer-director of the film, J C Chandor, is a great director.  His film MARGIN CALL remains the most powerful and understated examination of how Wall Street really works that I've ever seen.  ALL IS LOST pitted Robert Redford against the elements and in doing so created something like a profound exploration of character and worth.  These films had a style and a set of concerns that were new and unique to J C Chandor.  They felt authentic and urgent.  By contrast, A MOST VIOLENT YEAR seems like a slow and lingering meditation on an earlier time, both in New York history and in cinema history.


The film opens in 1981.  An immaculately dressed middle-aged businessman called Abel Morales (Oscar Isaac) puts all his life savings into a deposit to buy an oil terminal from some orthodox Jews who want the balancing payment in thirty days.  Morales is relying on his bank to provide the loan, but the bank gets cold feet when Abel's trucks start getting highjacked and his scared driver fires on his attackers.  This forces Abel on his knees to beg for loans from his business rivals - to becoming what he hates.  Because all through this film Abel has set himself up as a fair businessman, who doesn't cheat his customers, who offers his employees a career.  He's a cut above the corrupt and venal men he competes with, and the low-life district attorney investigating his affairs.  He holds firm even when his business is under attack. Like the good baker in THE GODFATHER, Abel goes to the police asking for help.  But  in the New York of 1981, everyone is corrupt.

So unfolds what feels like a spectacularly well told morality tale.  It looks and feels like a movie that's going to explore corruption in society but even more interestingly, corruption of the soul. Oscar Isaac at times looks like a young Al Pacino, trammelled in the mire.  We never know whether he believes his spiel about honesty or whether he just lacks the courage to play dirty, but it's fascinating watching him go up to the wire of violence and hold back.  The pacing is slow and steady, the photography from DP Bradford Young icy austere and then menacing and brooding. It feels like an episode of series two of THE WIRE shot by Gordon Willis - dark shadows enveloping the protagonist as he sinks further.  Even better, the film is shot through with superbly choreographed action, including a chase sequence that echoes THE FRENCH CONNECTION and a final showdown that echoes Michael Haneke's HIDDEN.

But what sinks the film is it's lack of moderation.  I understand that Abel's wife must look like a new money hustler from the early eighties, but must she pastiche Michelle Pfeiffer in SCARFACE?  Didn't we already see this done for laughs in AMERICAN HUSTLE last year?  Must the acting be so broad at the pivotal moments?  The writing so crass?  Must we have her pull a gun on a deer and call her husband a pussy?  And does JC Chandor we are going to be at all surprised by the plot twist that then arrives, or to buy into the sudden change of heart that follows?  It's all so thin, so weak, so disappointing.  Poor Oscar Isaac. He's the best thing in this movie and he can barely survive it.

A MOST VIOLENT YEAR has a running time of 125 minutes and is rated R in the USA. It was released last year in France and the USA and goes on release in the UK and Ireland tomorrow.  It opens in Canada on January 30th, in Portugal and Singapore on January 5th, in the Netherlands on February 12th, in Argentina on February 20th, in Brazil and Greece on February 26th, in Poland on February 27th, in Germany on March 19th and in Sweden on April 10th.
Posted by Bina007 at 20:18