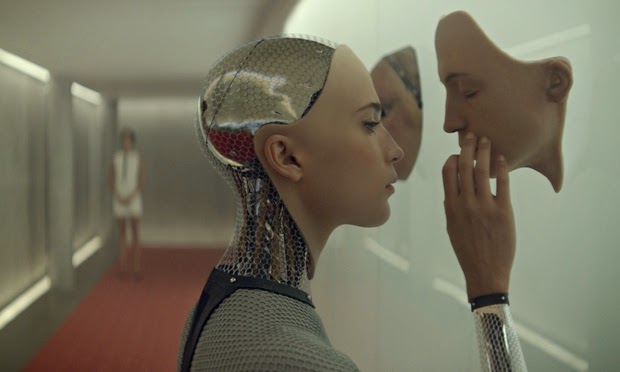 Any new film about artificial intelligence stands in the shadow of the great BLADE RUNNER and the no less philosophically incisive TV show Battlestar Galactica, as well as the ultimate sci-fi horror mash-up, Mary Shelley's Frankenstein. These films posed deep questions:  can a Cylon love and have faith; how does one know one isn't a Replicant; should a human be punished for raping a Cylon; what duty does the creator owe to the created?  For any film to add to this genre it must ask something different or those same questions better - with more visual flair, with greater insight as to the complexity of the answers, with greater emotional impact.  Sadly, EX MACHINA does not live up to those tall expectations. Moreover, even on the rather less ambitious question of whether it passes for entertainment, the jury is out.


The movie starts in media res.  A geeky young coder called Caleb (Domnhall Gleeson) wins a staff lottery to spend a week with the enigmatic owner of the internet search company he works for.  Beneath the superficial joviality of his boss (copious use of the word "dude"), Nathan (Oscar Isaac) is a paranoid obsessive genius who has invented an AI in the form of an attractive girl called Ava (Alicia Vikander.)  He has brought Caleb to his isolated laboratory to perform a Turing test - to test whether Ava's AI can pass for human.

For the first hour of the film we are enmeshed in Nathan's claustrophobic and controlled world, observing both Caleb and Ava in conversation. Predictably, there appears to be a mutual attraction between them, Nathan appears to have a gothic side, and Caleb wonders if he too is AI. As we enter the second hour of the film we move from the more academic sci-fi into something attempting to be a thriller.  There are twists that attempt to turn, and a denouement that well, to say more would be to spoil the film. All I will say is that if you are a fan of this type of movie, you will not be surprised at how things turn out.

What's to like in this movie? The production design of the modernistic prison of a billionaire's house is just beautiful, as the CGI that creates Ava's body.  Oscar Isaac's performance is charismatic and hints at crazy without ever sliding into evil Bond villain pastiche.  Domhall Gleeson has that nice credulous guy air about him and Alicia Vikander is nuanced and sympathetic. I really loved cinematographer Rob Hardy's use of colour palette to indicate a womb-like enveloping warmth, and then the crisp fresh tones of nature.  Which leaves me with the writer and director of the film, Alex Garland.  He has real sci-fi-/horror credentials, having adapted NEVER LET ME GO for the screen, and having written 28 DAYS LATER and THE BEACH.  The problem here is that the movie almost seems underwritten and under explored. It lives too firmly within its tropes and nothing surprising happens, and that little which does happen relies on a certain rather out of character but convenient lapse. All of which lets down what might have been a rather wonderful film.

EX MACHINA is rated R and has a running time of 108 minutes. It will play SXSW in March. The film is on release in the UK and Ireland. IT goes on release on February 20th in Latvia, on February 26th in Ukraine, on February 27th in Spain, on March 5th in Denmark, Australia and New Zealand; on March 20th in Estonia, Poland and Sweden; on April 10th in the USA, Norway and Italy, on April 23rd in Germany and Austria, on April 30th in Hungary and the Netherlands and on May 27th in Belgium and France.
Posted by Bina007 at 15:22