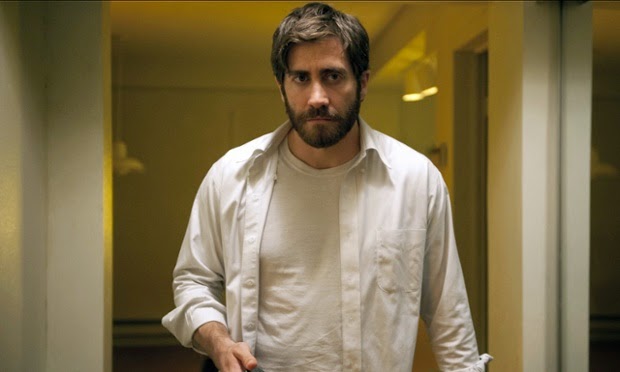 
Jake Gyllenhaal is Adam, a university lecturer in Toronto stuck in a repetitive job, alienated from society, and married to a woman who refuses to fuck him.  One day, despite his contempt for film, Adam watches a film and sees movie that apparently stars an actor who is his exact doppelgänger.  It starts off as an innocent infiltration.  Adam picks up Anthony's mail at the film studio.  And then he calls him up. He has a boyish excitement about finding someone who sounds like him.  It feels harmless. Except it isn't.  Meanwhile a freaked out Anthony starts googling Adam.  Anthony's heavily pregnant girlfriend thinks he's having an affair and ends up meeting Adam.  And this leads us into very murky territory indeed. Does Anthony exist? Does Adam?  Is this the story of one man with two lives?  Or is this two people deciding to escalate a battle of extreme disruption at the expense of the women in their lives?


I love how this film looks.  The cinematographer Nicolas Bolduc has created a palette of queasy, washed-out yellow-browns.  The sunlight always feels filtered and hazy, creating a sense of oppression and claustrophobia.  I also love the soundtrack by Danny Bensi and Saunder Juriaans (MARTHA MARCY MAY MARLENE) with its insistent heavy bass muted horns and amped up industrial metal scrapes.  The overall effect is one of sensory overload and urban decay - kind of like watching David Fincher films circa ZODIAC.  But added to this is a layer of craziness straight out of Lynch, with the symbol of spiders looming ever larger as the film progresses.  I think this is pretty hard to decode within the information given in the film.  But if you reach wider into the context of the author Jose Saramango, on whose novel "The Duplicated Man" the film is based, you can make some observations about life in the spider's web of a totalitarian regime.  Certainly the subject matter of Adam's opening lecture might hint at it.

Overall, ENEMY is a clever, taught, disturbing and provocative film that has far more to commend it than Denis Villeneuve's wildly popular PRISONERS.