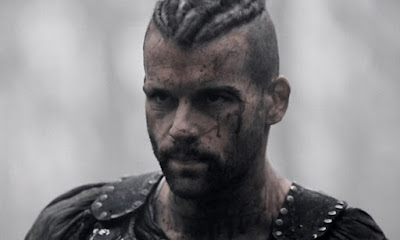 SWORD OF VENGEANCE is the directorial debut of Jim Weedon with a story written by Matthew Read, who is better known as the Executive Producer of the superb TV shows Peaky Blinders and Jonathan Strange & Mr Norrell.  He also wrote HAMMER OF THE GODS and this film is very much in the same vein of medieval Nordic bleak violence gore, with a kind of stripped down highly stylised Nicolas Winding-Refn/300-lite style. All of which makes sense when you realise that Read re-wrote Refn's PUSHER trilogy for the redundant English language version and produced the superb ONLY GOD FORGIVES.

In this film, we are firmly in the territory of revenge film.  A medieval Knight (Stanley Weber) with impeccable cornrows and the nickname Shadow Walker returns home to find his father dead and he basically goes on a vengeance campaign.  At one point he saves a feisty  dame from the evil baddie's sons and so joins up with her villagers and goes on a rampage, after a little A-Team style village remodelling.

There's minimal dialogue, minimal lighting, and lots of gore, blood, and rolling mist. The acting consists of men screaming in rage, or looking mean, and women looking oppressed. There's no character development, and actually very little plot. You know the baddies are baddies because they have hideous facial scars and eye-patches and talk in cliches like "Never send a boy to do a man's job."  It sort of feels like you're watching the off-cuts of Game Of Thrones - North of the Wall edition, or in the middle of Medieval Total War: Barbarian Expansion but with hand to hand combat and someone else at the controls. Which is, on the whole, less fun that just playing Medieval Total War.  But for people who like to see moody, dirty looking medieval blokes in boiled leather, fur capes waving axes around and looking gnarly, you are in for a treat.

SWORD OF VENGEANCE has a running time of 87 minutes. It is currently on release in the UK and opens on June 3rd in the Philippines and June 27th in Japan.
Posted by Bina007 at 18:18