A ROYAL NIGHT OUT 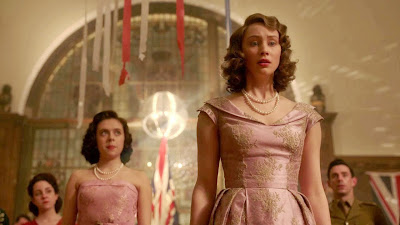 This year sees the anniversary or many a military event, not least the Battle of Waterloo which I am covering in real time with my @relivewaterloo twitter account. One of those anniversaries is the 70th anniversary of VE or Victory in Europe day. Many of us have grown up with iconic images of that night - the crowds partying in Trafalgar Square and the Mall.  Set against that backdrop, this movie - A ROYAL NIGHT OUT - is a very mild and respectful depiction of what might have happened if Princesses Elizabeth and Margaret had been given permission to celebrate VE Day among the masses.  The movie sees them beg permission of their parents, then hit the Ritz where Princess Margaret (true to later reform) manages to give her chaperones the slip and have a fine old time everywhere from the Ritz to a Soho brothel to the Chelsea Barracks. Meanwhile, her earnest elder sister, Princess Elizabeth tries to track her down with the reluctant help of working class airman Jack.


Of course, one can quickly write off this sort of film as fluffy, sepia-tinted patriotic drivel and there is a little pastiche-y tinge to the whole predictable confection.  I could have done without the screenwriters winking at the camera. At one point, Princess Margaret says of her mother "Does she think I'll be caught on the front page of the Daily Mirror in the arms of an officer?" And we all know quite well that this is exactly the sort of thing she would go on to get up to.  If one wants to make a historical fiction, it's best to play it with a straight face isn't it? But then again, the movie is somewhat naughtier than that.

Despite the superficial air of deep reverence for the institution of the monarchy, there's something magnificent and subversive about casting Rupert Everett as King George VI, offsetting the aggressive face-lifts with ageing make-up, and Emily Watson is almost scarily convincing as Queen Elizabeth.   Bel Powley is hilariously caricaturing "P2" or Princess Margaret as a good-time girl, and to see her improbably ask her parents "what's a knocking off shop" is superb.  Roger Allam (Game of Thrones) is always splendid, and he makes far more of a small part than one would've thought possible. An East End spin and brothel-keeper with an abiding respect for Queen Victoria - he embodies everything that is absurd in this film. Poor Sarah Gadon has not much to do as Princess Elizabeth other than to look dutiful and betray an inner strength - so perhaps it's the best true to life portrait of all. And poor Jack Reynor (TRANSFORMERS: AGE OF EXTINCTION) is stuck playing the chippy working class love interest with a heart of gold who isn't actually allowed to kiss Princess Elizabeth, at least in a direct shot, because that would just be disrespectful!

It's also worth mentioning that if once you overlook the absurdity of the film and just go with it, what's allowing you to do that is some really quite fantastic production design and cinematography from Laurnce Dorman and Christophe Beaucarne (MOOD INDIGO).  They somehow capture that feeling of mad celebration tinged with sadness among the London buses and champagne corks that's really quite wonderful to see.

So, while the script, from Kevin Hood (BECOMING JANE) and Trevor de Silva, might be a little hokey.  I really did rather enjoy this latest film from Julian Jarrold (BRIDESHEAD REVISITED.)