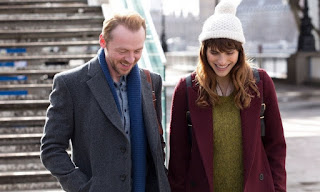 MAN UP is an adorable, funny, moving, smart romantic comedy starring Simon Pegg and Lake Bell, with an impeccable British accent. The required goofy set-up is that Jack (Pegg) mistakes Nancy (Bell) for his blind date, and because she has been hectored by her sister to man up and "put herself out there",  she runs with it.  The date goes surprisingly well, taking in a pop up bar, a cantina and a bowling alley, until Nancy's high school stalker Sean (Rory Kinnear) turns up and reveals the truth. At this point we need another improbable twist to keep the date going into Act Two - the couple need to return to an earlier bar to pick up some lost property and they happen to run into Jack's ex.  Cue our couple pretending to be an actual couple and a genuine moment of emotional connection in, rather improbably, a toilet.  We then roll into a third act that understands the cliches of the romantic comedy genre and satisfies them with authentic emotion, while also winking at the audience. A clever trick to pull off.

That the movie works is down to a well-written script that deals honestly with dating in one's thirties, and the genuine likability of, and chemistry between, the lead actors.  I've long thought Lake Bell a hidden gem of Hollywood - her IN A WORLD... was one of the best films of 2013.  The added bonus is Rory Kinnear as the creepy friend Sean. He's genuinely laugh-out-loud funny and his character adds a bit of spikiness to what would other be just a gently funny, sweet film.

MAN UP has a running time of 88 minutes and is rated 15 for strong language and sex references.   MAN UP played Tribeca 2015 and is currently on release in the UK, Ireland and Lithuania. It will be released in the Netherlands and Singapore on June 4th, in New Zealand on June 18th and in Germany on July 30th.
Posted by Bina007 at 12:57