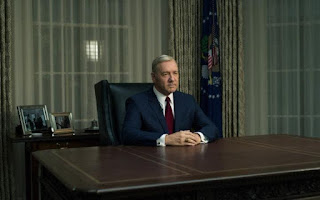 Thoughts:  The new season of House of Cards starts off just a few weeks behind where we are right now in the US political season - the primaries in Iowa are over with Frank scraping a win - and New Hampshire is happening through this episode.  But for all that, this season feels a bit like a relic given its position that establishment parties cut deals and run races.   We find Frank behind Dunbar in the polls but forced to head to Texas to stalk his wife.  At the end of last season, Claire left Frank but they clearly aren't divorced. Oh no - for this political couple that would waste far too much political capital. Instead she is trying to kick off her White House run by standing for Congress in Texas, replacing an established black female candidate. And so the remainder of the episode sees the Underwoods come to some kind of Cold War agreement not to destroy each other's political ambitions.

I love the amount of strong female characters that have been introduced in this episode. From Neve Campbell's campaign manager Leann Harvey, to Cicely Tyson's strong Congresswoman Doris Jones, to Claire's formidable mother Elizabeth (Ellen Burstyn).  I really hope we get to explore the issue of race in politics but also the interaction of establishment vs non-establishment candidates too.   Finally, I like the idea that the series started with the Lucas Goodwin story-line, which in a sense is just a variation on the Zoe Barnes storyline.  It's good that this basic Achilles heel to Frank's presidency continues to bubble under the surface, waiting to bring him down.

The episode opens in the prison cell of Lucas Goodwin - Zoe Barnes ex-lover and the journalist who tried to continue her investigation against Frank Underwood.  He's currently doing 10 years for trying to hack phone records. Lucas is telling his cellmate Gagik a fantasy that he can masturbate to. Later in the episode we learn that the Gagik took the fall on a murder rap for an Armenian LA gang and that Lucas is informing on Gagik for the Feds in exchange for witness protection.  That said, he's clearly scared that Frank will know he has been released and come after him.  By the end of the episode, Lucas has become John Carlyle who washes cars at a rental company.

After the credits we see that Frank Underwood is on Air Force One angrily preparing a speech on the campaign trail and Doug Stamper is back in his employ.  This is intercut with an exemplary speech to an adulatory crowd in New Hampshire. The next morning Frank campaigns in Texas which is clearly raising questions as he should be in New Hampshire where his opponent Heather Dunbar has a ten-point lead in the polls.  His chief of staff Seth wants to know what's going on with his marriage. We also learn that Frank's likely opponent in the General Election will be dashing young New York Governor Conway.

Meanwhile, Claire Underwood, who left her husband at the end of the last series, has moved into an old grand family house in Texas which is under dust sheets and presumably belongs to her parents.  They are clearly estranged as the mother doesn't meet her. The next morning Claire Underwood hires Leann Harvey to run her campaign for Congress. She wants to replace Doris Jones, a retiring civil rights campaigner whose daughter is expected to stand but hasn't done so yet.

In a quite extraordinary dream sequence Frank imagines that Claire is in his hotel bedroom and that he starts violently attacking her before she fights back. He is awoken by Meechum.  Frank has people watching Claire to see what her move is and sends Stamper in to see Leann and puts Frank on the phone to warn her off of Claire's campaign.  The next morning Claire meets with Doris Jones but Stamper informs Claire that Leann isn't coming. It transpires that Stamper has already cut a deal whereby Doris' daughter becomes Congresswoman and Claire gets Governor of Texas. Claire sets them straight. She wants Congress and then she would back the daughter, Celia, after one term. The Jones' women are unimpressed - Claire is too privileged and white.  But Claire offers them Federal funding for a medical facility that they want. After the meeting, Claire warns Stamper off and tells him she won't speak to Frank until he decides to back the race.

Meanwhile, from Seth Grayson, Frank's Press Secretary, we learned that Frank barely won Iowa and might lose New Hampshire.  He has an illicit meeting with someone who asks for information on the campaign and what's happening in Texas in exchange for being Seth's Plan B.  The fact that Claire and Frank have had a marital disagreement is then leaked to the press. Frank suspects his opponent Heather Dunbar.  As the press camps outside of Claire's parents house, Stamper tells Frank he should intercede with Claire's mother, Elizabeth, to intercede.  At a press conference in the White House, Seth fends off the rumours he himself started.

Frank meets with Elizabeth and she clearly shows her contempt for him as low-class. Claire meets with Leann and tells her she'll handle Frank and can offer Leann real power as she manages Claire into the White House. They all then meet and Frank tells Claire his mother has cancer.  She agrees to say that's why she came down to Texas if he agrees to stay out of her campaign.  By the end of the episode we learn that Frank has lost New Hampshire to Dunbar for the Democrats and that Governor Conway has won for the Republicans. We also see a reconciliation between Claire and her mother - "You are stronger than he is but you've got to put him in his place."
Posted by Bina007 at 09:19