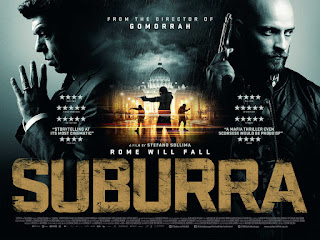 SUBURRA has a running time of 130 minutes and is rated 18 for strong sex, violence and drug misuse. The movie was released last year in Italy, Switzerland and France and opened earlier this year in Finland and Portugal. It's currently on release in cinemas and on demand in the UK and Ireland. It opens in Sweden on September 9th.
Posted by Bina007 at 18:54