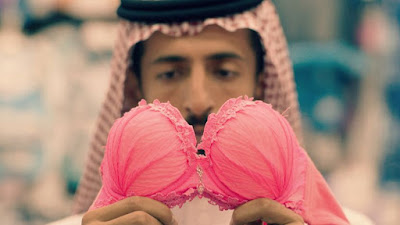 Debut writer-director Mahmoud Sabbagh’s Saudia Arabian romantic comedy is an absolute delight - giving us a fascinating glimpse into contemporary society in Jeddah through the eyes of our star-crossed lovers. The first is Barakah (Hisham Fageeh) a charming young municipal enforcement officer and amateur actor whose job seems to involve keeping people off the streets and whose hobby involves him buying a bra to play a woman in "Hamleet". He's under pressure to get married from his family and has never held a girl's hand. But he's a huge fan of "Bibi", an instagram star with a million followers who always cuts off her face in photos. A chance meeting leads to a tentative romance, but the real problem is finding a place where they can meet and just chat, because public spaces are hugely patrolled and to a certain extent inaccessible for singletons.

The resulting film is funny, beautifully observed and upbeat. Perhaps the reason why it got through the censors is that while it does have a political angle, it wears it lightly. There's a moment of frustration when Barakah tells his father that the older generation selfishly enjoyed freedoms now denied to their kids, and its illustrated with a harmless but tragic slideshow showing the old Saudi air stewardesses in western dresses and people hanging out at the beach. And Bibi ends up literally putting a finger up to society in an instagram video but soon takes it down to appease her mum. As a result we see the limits of revolt in Saudi - as much as in the uncommented on and unstaged shots of advertising hoardings with pixellated faces as anything else. The tone of the film is then, melancholy rather than angry, and elevated by the quiet humour of Barakah and the more raucous characters familiar to those of us from Asian backgrounds - the old aunty who has a potion for every problem and can guarantee love and a male child! Accordingly, as in Almodovar, the poignant and the almost cartoonishly larger-than-life sit side by side.

BARAKAH MEET BARAKAH has a running time of 88 minutes. The movie played Berlin 2016 where it won the prize of the Ecumenical Jury. It also played Toronto 2016. Both screenings at the BFI London Film Festival are sold out but there may well be standby tickets available.
Posted by Bina007 at 10:41