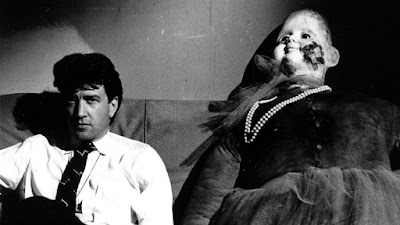 Peter Braatz' lyrical documentary is a must-watch for all fans of David Lynch's surreal, beautiful, disturbing work.  As a younger film-maker, Braatz served as an intern on the iconic 1980s movie, and shot lots of photos, behind the scenes videos and interviews. Now, thirty years later, he has assembled a collage of impressions of what it was like to work with and for Lynch and how the film came together. But this isn't a conventional linear documentary, with carefully composed and edited talking heads taking us from the films conceptions to final release.  Rather, in the manner of Lynch himself, the film is a kind of meditation and mood movie - carefully layering images and interviews and a beautiful sound-track to take us into the emotional world of the film.

One of the things that jumped out at me was how calm the shoot seemed to be - the union of all members of cast and crew in this strange endeavour.  Lynch repeatedly claims that this is the happiest he has ever been on a shoot - going back to a low budget in exchange for artistic freedom.  There seems to be a spirit of trust on set - trust in David's genius and vision.  Even people who don't really like films - like actor Jack Nance - or don't believe Lynch is au courant - think the movie is going to be something special. Lynch himself, secure in the quality of each component, is quietly confidant too.  It's also pretty special just to sit back and watch the man at work - his immense attention to detail - personally adjusting and trimming a wig - and the way in which movie making feeds into his larger artistic life with sketches of the day's events.

This movie is then, a wonderful indulgence for fans of Lynch - as creative in its approach as Lynch deserves, and a visual and aural delight.

BLUE VELVET REVISITED has a running time of 86 minutes. Tickets are available for both screenings.
Posted by Bina007 at 21:00