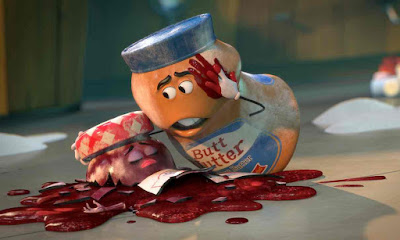 SAUSAGE PARTY is a very funny very smutty animated comedy by the team that brought you THE INTERVIEW and PINEAPPLE EXPRESS. Evan Goldberg and Seth Rogen make R rated comedies that contain a lot of truth and some things you just can't believe are being put on screen.  To wit, they have a Holocaust joke in the opening 3 minutes of this film, the first of many, liberal use of the C word, and a plot that basically hinges on a radical atheistic debunking of religion and breaking the fourth wall.

The conceit is that all the characters are foodstuffs being sold in a supermarket.  They believe that the Great Beyond lies on the other side of the supermarket doors, with benevolent Gods (humans) caring for them in paradise. The drama begins when a jar of mustard is returned and reveals the shocking truth that humans EAT food.  This prompts our hero and heroine, a sausage and a bun, to escape their trolley and go in search of the real story from a bottle of fire-water and his baked side-kicks.  Meanwhile, another hot dog is trying to find his way back to the store and stumbles onto some handy scientific knowledge from a Stephen Hawking-style piece of gum.

The jokes are ribald, hilarious and come thick and fast.  The politics is heavy-handed but intelligent.  The final twist audacious.  And underneath it all, the film is actually really-well animated! So kudos to all involved. This is a somewhat bizarre, but really good time.

SAUSAGE PARTY has a running time of 89 minutes and is rated R.  The movie played by SXSW 2016 and opened earlier this year in Colombia, Georgia, Israel, South Korea, Mexico, Bulgaria, Canada, Poland, Romania, the USA, Belgium, Sweden, Albania, Macedonia, Slovenia, Spain, Estonia and Latvia. It opened this weekend in the UK and Ireland. It opens on September 8th in Azerbaijan, Belarus, Denmark, Croatia, Kazakhstan, the Netherlands, Russia and Norway; on September 15th in Brazil and Lithuania; on September 29th in Philippines, Argentina and Greece; on October 6th in Germany, Hungary, Italy, Singapore, Ukraine, and Austria; on October 20th in Thailand and on November in France.
Posted by Bina007 at 23:52