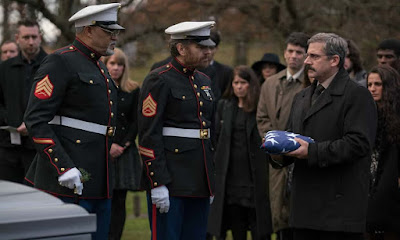 LAST FLAG FLYING is the latest film by indie director Richard Linklater, famous for his BEFORE SUNRISE trilogy, and more recently, BOYHOOD.  It's based on a novel by Daniel Ponicsan.  The arthouse movie fans among you might remember that Ponicsan wrote an earlier novel set in Vietnam, which became the Hal Ashby movie THE LAST DETAIL. This film is then based on the sequel to that novel but chooses not to use those actors or character names.

Essentially it's a story about three old friends and Vietnam veterans who have fallen out of touch reconnecting when one of their sons is killed in Iraq.   The father, Doc, is played by Steve Carell, a performance of quiet grief that slowly amplifies into real anger.  He is supported by cynical bartender Sal (Bryan Cranston) and former tearaway turned reverend Richard (Laurence Fishburne).  What comedy their is stems from the battle of wits and values between Sal and Richard, and jokes about getting old, but really this is a melancholy and world-weary movie. It's a film shot in dull and muted colours, and staged in dingy wintery railway stations. run down motel rooms and unfashionable bars. It's about three men who are patriotic and served their country, but who no longer understand why Vietnam or Iraq were prosecuted.  This provides what little plot their is - Doc refuses to have his son buried as a war hero and so they need to find a way to take him back to New Hampshire to be buried as a son - a civilian.

I really wanted to like this movie but found it a rather tedious watch - it takes a long time to get going.  I also found it confusingly jarring in tone.  One minute we're in a very moving scene in which a grieving father sees his son. The next minute the three friends are joking about visiting a whorehouse in Vietnam. The movie just never came together for me - the characters didn't seem real but personality types sent in to clash against each other - and I didn't really think I had been provoked to feel or think anything different about war by the end of it.  I also had issues with some of the easy emotional resolutions at the end which felt convenient, compromised and unearned. Ultimately, this was a forgettable experience.

LAST FLAG FLYING has a running time of 125 minutes and is rated R in the USA and  15 in the UK for strong language and sex references. The film played New York and London 2017.  It opened in the USA, Canada and Portugal last year. it opened in France last week and opens in the UK and Ireland, Singapore and Mexico, this Friday. It opens in Argentina on February 8th, in Spain on February 16th and in Greece on March 15th.
Posted by Bina007 at 21:30