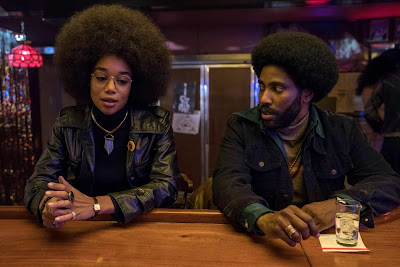 BLACKKKLANSMAN is a superb, searing, angry film from a very angry film-maker. The astonishing thing is that the film-maker - Spike Lee - manages to command such self-discipline despite his anger, and manages to fashion a film that is both brutal and funny. How many film-makers could straddle that line so expertly? How many could command such a knowledge of film history as to weave classic depictions of racism in a film that feels so authentically of the 1970s, and yet so seamlessly builds to Charlottesville and contemporary racial violence?   To say BLACKKKLANSMAN is a tour de force is an under-statement.  It is provocative, goofy, feel-good, feel-distraught, bloodied but unbowed.  This is cinema at its most heightened, powerful and disturbing.

The movie opens with a provocation that may have passed some viewers by. Spike Lee spends much of this film both indicting and redeeming mainstream Hollywood films from their role in normalising racism. He opens with GONE WITH THE WIND - a film that depicts subservient slaves oh-so-happy to be taken care off by their paternalistic owners, and actually has a couple of them saye a white girl from rape.  He then has one of Hollywood's most famous black activists - the magnificent Harry Belafonte - indict THE BIRTH OF A NATION for resuscitating the popularity of the KKK. Belafonte shows how the film inspired a lynching, and was praised by then President Woodrow Wilson as "history written in lightning".  Belafonte/Lee show us explicit photographs of what happened to the victim.  Lee  then intercuts this with footage of the KKK recruits being inducted, complete with white hoods, in the 1970s of the main action of the film.  Finally, Lee takes his fictional film and directly connects its subject matter to contemporary America, showing footage of the racial violence in Charlottesville and Trump's mealy-mouthed false equivalence between the white supremacists and those opposing them. It's as if he's saying to us - remember that one president who said how the KKK looked amazing in that super popular film. Well, now I'm taking back your cinema screens and showing you another president, a hundred years later, being similarly racist, and you WILL watch and be shocked and provoked. And boy was it shocking.  Even when you see this footage on twitter videos, or on the news on TV, it's just different - visceral - seeing it on the big screen, especially after the two hours of build up that Spike gives it.

So back to the plot. The film is based on the almost absurd true story of a black cop who infiltrated the Klan back in the 1970s. He did this by ringing them up and asking for info and pretending to want to join.  He even got so far as to speak to David Duke! Of course, when he needed to actually attend those meetings and get enough evidence to arrest people he had to send in someone who was actually white - in this case an actually Jewish cop. So the Klan was doubly fooled.  John David Washington (son of Denzel) gives a quietly powerful portrait of the black cop - Ron Stallworth - and it's actually worth noting his defense of being a cop in the first place to his radical girlfriend. It's a message many in contemporary America need to hear.  There's something noble in being a cop - not all cops have to be racists. Adam Driver is similarly impressive as the Jewish cop who has never particularly felt the power of his race or religion and is forced to address his "passing" when he hears explicit anti-semitism of the first time.

As the film progresses we see the imposter inducting into the Klan - a Klan that is planning bomb attacks against its enemies. The superficial tension comes from whether our cops will be exposed, and whether the attack will go ahead. And it works. But the real tension comes from Lee taking us right up against the most horrid racism, and keeping us there for 2 hours, and seeing if we will flinch from seeing it play out to its contemporary climax. When it comes it feels earned, brave and bold.

BLACKKKLANSMAN played Cannes 2018 where it won the Grand Prix. It was released in cinemas this summer and is now available to rent and own. The film is rated R and has a running time of 135 minutes.
Posted by Bina007 at 19:10