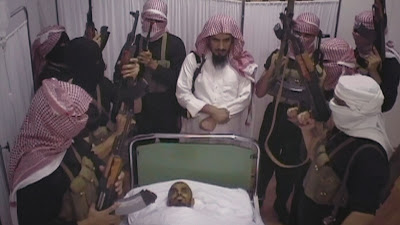 PATH OF BLOOD is a truly fascinating and disturbing documentary that takes us inside the Al Qaeda campaign of terror inside Saudi Arabia between 2003 and 2009.  The documentary has been expertly curated by director Jonathan Hacker and editor Peter Haddon from 500 hours of footage provided by Saudi security services of their own raids on Al Qaeda facilities, and of Al Qaeda's own home videos of their training camps, actions, funerals and recording sessions.  The result is a deeply insightful and uncomfortably personal glimpse at how a terror cell behaves.  At times, these are goofy kids, preening for the cameras, or playing school sports day games in the desert. And then in a flash they pose with rocket launchers and don suicide vests to deliver final statements to camera before a suicide mission.  We see them rehearse manoeuvres to kill, and we see them dead.  In the particularly disturbing scene shown above, we see a young dead man being kissed by his colleagues before his funeral. We also see the devastation he has wrought - blasted buildings, blood-stained blankets covering bodies, shattered window panes and bloodied car-seats, offices, homes. This is not a documentary for the faint-hearted.

The discipline of the documentary is not to use talking heads to comment on the action. Although this is, at times, frustrating, because it allows the hypocrisy of the Saudi ruling family in simultaneously sponsoring Wahhabi fundamentalism, it is - on the whole - the right decision, because it keeps the focus firmly, claustrophobically, on the terrorists.  Through their own words, deeds, reactions,  and propaganda, voiced by Tom Hollander, we have a sickening view of their mindset.  Their actions are sometimes very hard to watch indeed.  We see an American expat blindfolded and tortured.  The video cuts to black but we continue to hear the audio as he is threatened with a beheading that we know will occur. This is brutal viewing:  92 minutes has never felt so long but for the right reasons.

If PATH OF BLOOD is rightly disturbing it's also compulsory viewing for all of us who live in a world that is still subject to terror, whether from Al Qaeda or its even more vicious stepchildren, ISIS and Boko Haram. On a more meta level it's also fascinating to just see Saudi Arabia - a country that is so closed off to us and yet seems to dominate so much political discourse. Just seeing ordinary streets, houses, offices is of itself fascinating. And of course the fact that the footage was released is of interest in trying to pick through the runes of what Saudi leadership's actual position is on fundamentalism.

PATH OF BLOOD has a running time of 92 minutes and is rated R. The movie will be released on DVD in the UK on November 26th.
Posted by Bina007 at 17:49