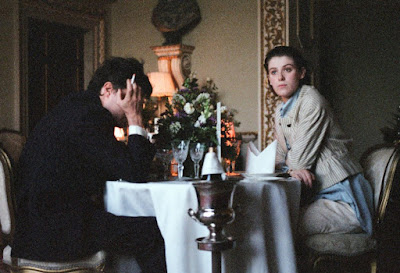 THE SOUVENIR is writer-director Joanna Hogg's personal memoir of her time as film student in London in the early 80s and a love affair she had with a charming but dangerous older man.  Set largely in a meticulous recreation of Hogg's Knightsbridge flat, we are introduced to the fictionalised Julie (Honor Swinton Burne) as a naive, privileged, earnest and desperately vulnerable young woman.  At first, her relationship with Anthony (Tom Burke - finally finding a role to flex his muscles in) seems innocent enough, although the age gap is troubling, as is his domineering personality. But we, as Julie, as her parents, are lulled into a sense of complacency by his posh accent and apparent Foreign Office job. Soon we discover that all is not as it seems - earlier in fact than the alarmingly innocent Julie. It starts with him cadging a tenner, and ends with a kind of emotional domination and abuse, centred around a character twist that I won't reveal.  The tension of the film lies first in knowing whether Julie will gather the strength to leave Anthony, and second in whether her mother (played by Honor's real-life mother Tilda Swinton) will intervene.

As in her previous, outstanding, films  - UNRELATED and ARCHIPELAGO - Joanna Hogg creates these wonderfully tense, nuanced, naturalistic chamber pieces where characters are trapped in seemingly ordinary conversations but so much is going on in their interior lives - so much is unsaid - and the stakes seem so high. Tom Burke is absolutely superb as Anthony, in the most difficult role of creating a character at once despicable, but also pitiable, who we have to believe is charming enough to be loved. Honor Swinton Burne is not called upon to show such range, but is convincing in playing a shy young woman. If THE CROWN needs to cast a shy young Diana they need look no further. And stealing the show, we have a deliciously funny cameo from Richard Ayoade with one of the most quotable lines in film. I'd repeat it here but it gives away too much plot!

Kudos to Joanna Hogg, whose idiosyncratic scripting and shooting style got the best out of a new actress and creates a slow-build tension and genuine emotional involvement in the lives of these characters.  One must also comment on how she captures particular visuals - a shot of the Grand Canal (perhaps one of the most hackneyed scenes and yet so beautiful and apparently fresh here) - or a disagreement in a hotel room that's so emotionally difficult to behold that we see it reflected in a mirror.  This film really is unique, disturbing, beautiful and melancholy.  I cannot wait to see the second part.

THE SOUVENIR has a running time of 119 minutes and is not yet rated.  The film played Sundance 2019 where Joanna Hogg won Grand Jury Prize - World Cinema - Dramatic.  It will also play Berlin 2019. It does not yet have a US or UK release date.
Posted by Bina007 at 16:39