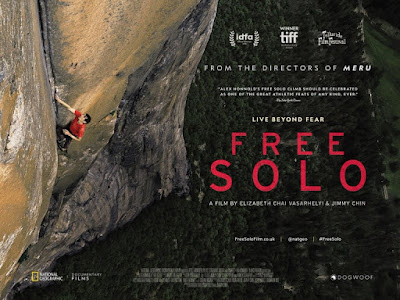 FREE SOLO is a truly exhilarating and beautifully edited documentary about the famous free solo mountain climber Alex Honnold and his assent of a nearly 3000 foot rock face called El Capitan.  Don't know what free solo'ing is? Neither did I. It turns out it's the bonkers activity of clambering up a vertical mountain with nothing but a pair of specialist trainers and your hands covered in chalk.  No ropes. No safety.  If you slip you die.

As someone who is extremely risk averse I've always sought out docs about mountaineers and people who take on extreme risk. I'm fascinated about why they do it? Is it a kind of addiction to the thrill?  Are there just some people who see a big rock and think I must get to the top of it? And what is the price they pay in terms of sustaining relationships? We get all that in this doc.

It turns out that Honnold has a mix of two unique features. First, apparently his amygdala doesn't get as fired up by the kind of high-jinks that would get you or I excited. So he genuinely biologically needs a bigger thrill to feel alive. Second, we get glimpses of a slightly odd childhood, wherein he constantly had to prove he was a winner to his demanding mother, and potentially his dead father.  And there were no hugs and no uses of the L word. It's not hard to see why this super bright geeky kid would then veer toward an almost isolated lifestyle in which he seeks more and more impressive and risky feats of climbing.

As the doc opens we meet Alex living in his van eating food straight out of a saucepan.  Amazingly a lovely young woman called Sanni falls in love with him and is willing to tolerate the fact that he could die on any climb and has trouble expressing his feelings.  It's hard to know whether I was happier when he completed his mammoth ascent or spontaneously told her he loved her when she called him at the top!

But the real joy of this film is the glimpse we get into the sheer technical mastery these climbers employ. Seeing a man map out a 3000 ft ascent millimetre by millimetre - movement by movement - is just impressive. I'm not massively into climbing, but it was absolutely gripping. You really have to admire the directors Jimmy Chin and Elizabeth Chai Vasarhelyi, for how they preview the tough bits of the climb, and use graphic effects to make us familiar with the how the climb needs to go, so that when we follow Alex doing it, we are utterly invested in his success and aware of where the greatest peril lies. Even though I knew the outcome I was on the edge of my seat, super-stressed, catching my breath.  The landscape photography was amazing, the use of drones and cameramen at stages on the climb gave us a wonderful insight into how it took place - and the exhilaration at the top was amazing.  I simply cannot recommend this documentary enough.

FREE SOLO has a running time of 100 minutes and is rated PG-13. The film played Telluride and Toronto 2018 and was released in the USA and UK last year. It is available to rent and own in the USA and will be released in the UK in early March.  The film has been nominated for many awards including an Oscar and has won - among others - the Toronto people's choice award and a Bafta.
Posted by Bina007 at 09:55