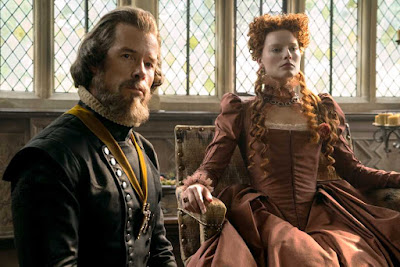 Theatre director Josie Rourke turns to the big screen with a surprisingly good historical drama focussing on the period between Mary Stuart arriving in Scotland in 1561 at the age of 19, and her abdication and flight to England 7 years later at the age of 26. We then get a coda of her execution nearly 20 years later. Accordingly, those looking for a detailed examination of the Babington plot will go unrewarded. This is, I feel, rightly an interrogation of why this woman with such a strong claim to both the thrones of Scotland and England, could neither hold onto one, nor claim the other.

In answering the question, screenwriter Beau Willimon draws parallels between Mary and her cousin, Elizabeth I of England, Wales and Ireland. He posits a three-fold answer.  First, Elizabeth I transforms herself, politically speaking, into a man.  Rather than making herself vulnerable to a husband's control, she forgoes the joy of motherhood to rule uncontested, and in a manner that her court can accept.  By contrast, Mary is made weak by the ambitions of her husband, his father, and her half-brother.  Second, Elizabeth I is exceedingly lucky in her loyal, skilful and ruthless advisor, Lord Cecil, whereas Mary is ultimately betrayed by her courtiers, not just once but many times.  Finally, the film seemingly argues that Mary's own character was to blame - not least her wilfulness in marrying Darnley, and her arrogance in condescending to Elizabeth I even as she begs for an army to retake her crown.

As one might expect from the show-runner of HOUSE OF CARDS, the script is a really good and pretty factually accurate depiction of the civil turmoil in Scotland during Mary Stuart's reign. The principal objections to Mary's rule are that she's a woman, and a Catholic.  Her protestant half-brother James' regency is thus preferred by some. Radical cleric John Knox preaches against her alleged infidelity and her allegiance to Rome.  And even those apparently on her side - her Catholic Stuart cousin Henry Stuart, whom she marries, is angry when she won't make him her successor.  Willimon deftly shows Mary manoeuvring and being outmanoeuvred, until finally she has nowhere else to run except England.

I also loved everything about the costumes and make-up in this film - beautifully contrasting the more formal opulence of the English court with the more intimate less gaudy Scottish court.  Make-up is also used with great effect to contrast Mary's insistence that she rules as herself - a strong-minded Catholic woman - and Elizabeth subsuming herself into the image of the Virgin Queen  - a theme also explored to great effect in Shekhar Kapur's superb ELIZABETH.  Max Richter's score is wonderful and I love how Josie Rourke weaves music into the foreground, particularly in the character of Mary's favourite, David. That said, Rourke can't direct a battle scene for toffee.

Historically, of course, the two Queens didn't meet. Or if they did, there's no strong evidence for it. And the director nicely hints at this in the opening moments of their meeting, as they struggle to find each other throughly gauzy sheets, giving the meeting a fantasy quality.  There is some evidence to hint at Darnley's bisexuality, if not that he slept with David. Mary's tolerance for David's cross-dressing seems anachronistic.  And of course Mary probably spoke with a French accent.  But aside from these dramatic inventions, I DO think that the film gets at something more profoundly true about how both of these women approached being Sovereign and why ultimately one prevailed and the other did not.  And that's the greater purpose of cinema, after all. We also get a typically superb performance from Ronan as Mary - but perhaps more surprisingly, a really emotionally powerful, stunning performance from Robbie as Elizabeth - one that really does steal the film.  In fact, I would go so far as to say that I would love to see Robbie portray Elizabeth in a series of films.