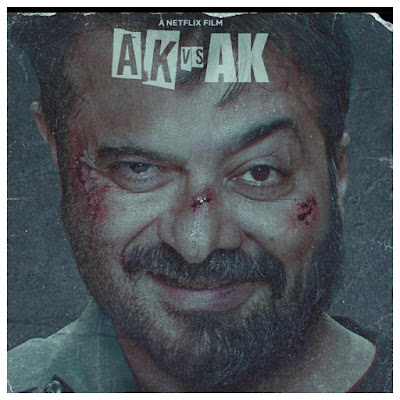 Anil Kapoor is the real life ageing former "hero" of Bollywood, scion of a famous acting dynasty and most famous for his role as Mr India in 1987. Think Bollywood's Tom Hanks, married forever to his wife, with two lovely kids. Anurag Kashyap is the self-styled Tarantino of Bollywood - the young upstart crafting gritty sweary gangster dramas - scion of no particular family with a car-crash personal life.
This hilarious, smart, kinetic mockumentary begins with Kashyap insulting Kapoor as a has-been at a film-festival, resulting in a social media furore and his career nosediving. A year later, Kashyap decides to extract his revenge by kidnapping Kapoor's real life daughter Sonam and giving Kapoor till sunrise to find her. He can't call the police; he can't ask for help; all phone calls have to be on loudpspeaker; and Kashyap's camera has to capture it all. The result will be, per Kashyap, an amazing action thriller that catapults his career back to the A-list.
The result is one of the smartest, funniest thrillers ever made in India.  Kashyap perfectly portrays a kind of manic insanity and reminds us he's actually a very good actor as well as a pioneering director.  But it's Anil Kapoor who steals the show, shaking of his good guy image in numerous hilarious incompetent punch-ups with Kashyap. His real-life son Harsh Kapoor also gives a great cameo as an idiot fanboy describing his own potential action scene.
But there's a dark underside to this superb comedy-thriller.  It comments on the superficiality of selfie culture, with an increasingly beaten-up, bloody and desperate Kapoor being asked for selfies by seemingly oblivious fanboys.  And in the best scene of the film, a totally broken Kapoor is commanded to dance like a performing monkey, still bringing the crowd to cheering applause with a hit from 1987.  There's also a wry comment about the misogyny of Bollywood, but to discuss that is to spoil the superb end-reveal.
To be sure, you'll get more out of this film if you're cineliterate, and equally versed in Hollywood and Bollywood references.  Like Tarantino, Avinash Sampath's script is chock-full of knowing references. But Mr007 has no background in Bollywood and didn't know who either of the AK's were but thoroughly enjoyed the film on its own terms regardless.
Highly recommended.
AK VS AK has a running time of 108 minutes. It is streaming on Netflix.
Posted by Bina007 at 09:37