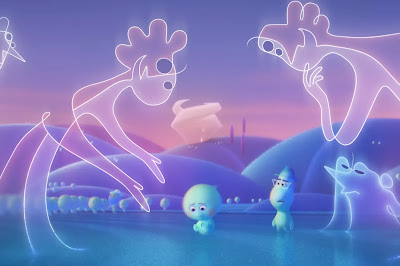 SOUL is a deeply affecting and visually ravishing film from Pixar. It stars Jamie Foxx as a mild-mannered, warm-hearted jazz musician called Joe who never quite got that big break and has ended up teaching band class.  A grateful former pupil finally hooks him up with a big break but Joe has an accident and dies. He ends up quite literally on a staircase to heaven but fights to come back and play his big gig, meeting a little unborn soul called 22 on the way. So they get back to New York but end up in the wrong bodies - 22 in Joe, and Joe in a cat! And what ensues is your classic body mix-up comedy, along the lines of Freaky Friday or Big. The different perspective allows 22 to find joy in music and simply living, and allows Joe to realise that Jazz isn't what gives him purpose after all - it's acts of kindness and living each day.
What elevates this film beyond the classic body mix-up comedy is its heart and its imagination. Speaking to its heart, I don't think I've ever seen a film portray the joy of playing music so beautifully, or the awe and joy that hearing someone lost in the moment can inspire. I'm not even talking about Joe here. The best moment is seeing a young girl called Chloe sit on Joe's staircase playing her trombone, and 22, in Joe's body, look on in awe. There's also something really wonderfully touching and joyful in how Moonwind (Graham Norton) is portrayed. Normally, hippies and kooks are portrayed as Goopy idiots, but here they are treated with affection. They also have a kind of wisdom and a part to play.
As to the imagination, this film pushes animation beyond anything I've ever seen before.  The beautifully re-created contemporary New York is sunlit and sepia toned and captures both its beauty and rambunctiousness - from the crazy soundscape of a New York pavement to the crowded jangling of a subway train. This would be achievement enough but it contrasts to brilliantly with the ethereal dreamworlds of the The Great Before, a strange in-between, and The Great Beyond. The Great Beyond is a stunning black and white abstract moving walkway with a strange electronic soundtrack that feels both odd and reassuring. The in between world is again monochromatic but drawn in 2-D and the most starkly abstract. And then we land in The Great Before which is all luminous pastels and fuzzy edges. I particularly liked the design of the wire-frame 2-D characters that shepherd the little souls. It's just amazing how much character and expression the animators managed to get into these simple abstract figures.
The resulting film is a tour de force of visual imagination with a score as varied and wonderful. This is the best that Pixar has yet produced.

SOUL is rated PG and has a running time of 100 minutes. It is streaming on Disney+.