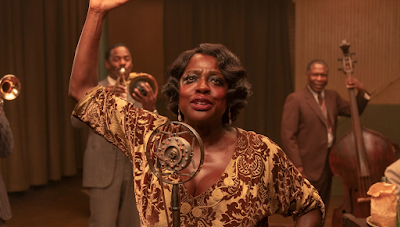 It's a searingly hot day in 1920s Chicago.  A black blues band is shut into a dank dark basement to rehearse for a recording session.  The session is run by rich white men.  The star is late. And she is well aware of the delicate power balance that lies between her - the moneymaker - and the men who control access to the record business.  She is Ma Rainey - the Mother of the Blues - a big butch black woman who wears greasepaint make-up and a horse-hair wig and sings and speaks with an authoritative growl. She knows what she wants - whether that's the complete devotion of her lover Dussie-Mae, or a cold coca-cola, or her stuttering nephew to speak on her track. She holds both her manager and the studio boss in contempt and with good reason. She knows full well how the North is just as racist as the South. Most importantly for the plot of this chamber piece, Ma Rainey has no time for the pretentious jazz stylings of Levee Green, or for his eyeing up her lover, or for any kind of destabilising of her core style when Bessie Smith is rising up as a rival.  Levee is, by contrast, a man who still thinks his talent will win him a fair shake by the recording studio. Although we realise as the film goes on just how angry, and damaged, and traumatised, and violent, he is. Because this is a film that does not shy away from describing and showing the most brutal forms of racism - whether rape and lynching, or the exploitation of black talent. Life is truly a brick wall behind a locked door.  Ma Rainey knows this from the start: Levee comes to a painful realisation during the course of the film.

The resulting film is good if you take it as it is - a filmed play.  As such the language (Ruben Santiago-Hudson adapting August Wilson) is stylised and the action largely confined to either the rehearsal room or the recording room.  We have moments of high drama in the form of powerful monologues by Ma Rainey and Levee, and a final act release of tension. If you take it as it is, this really is a powerful and moving drama. Viola Davis' Ma Rainey is an instant icon of queer and black cinema - a powerful and uncompromising figure who speaks honestly to the racism of her time. Kudos to the costume and make-up designers that gave her heft and sweat and revolting make-up - underlining the fact that she was not going to survive a more superficial mass marketing age. But it's Chadwick Boseman in his final role that steals the show, with his two powerful monologues. The latter is a violent indictment of an absent God, and given what we now know about Boseman's fatal illness, and can see in his thinner frame, it has an extra pathos. I suspect that he will be posthumously nominated for Awards and deservedly so.

MA RAINEY'S BLACK BOTTOM is rated R and has a running time of 94 minutes. It is streaming on Netflix.