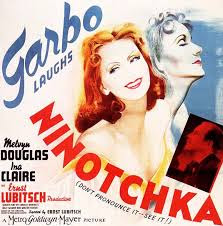 NINOTCHKA is a marvellously spiky satirical romance that manages to mock capitalist decadence and communist dogma in equal measure, as well as giving us Greta Garbo's most versatile performance. She stars as a dour Soviet agent sent to Paris to castigate her three comrades who have so completely failed in their mission of selling confiscated jewellery to raise hard currency for the state. The irony is that the harder than hard Ninotchka is seduced, just as her comrades have been seduced, by fine wines, beautiful clothes, and yes, laughter and love. The seduction comes in the form of Count Leon (Melvyn Douglas), a Parisian rogue, who discovers something finer in himself when he meets Ninotchka and is even willing to go to Russia to get her back. Ninotchka discovers love through laughter rather than melodrama, just as we see the absurdity of dogma through satire. It's a wonderful mix and absolutely pitch perfect, from Billy Wilder's scabrous script through to Garbo's silly hat and the fascinating cameo by Bela Lugosi as the Commissar. But, ultimately, as much as the dialogue shines, it's Garbo's deadpan delivery that kills us - her willingness to send up her cold, unapproachable beauty and to deaden her endlessly expressive face in the early scenes only to truly laugh at herself and her love of champagne as the movie builds.
Ninotchka: We don't have men like you in my country.
Leon: Thank you.
Ninotchka: That is why I believe in the future of my country.
Ernst Lubitsch (TO BE OR NOT TO BE, THE SHOP AROUND THE CORNER) was famous for directing sophisticated comedies for Warner Brothers, and brought his famous "Lubitsch touch" to MGM in the 1930s, typically directing comedy musicals. Given his facility with comedy, he might've seemed a perfect fit for Billy Wilder's scabrous, satirical script, and for the movie marketed as "Garbo laughs!", but he was actually drafted in as a replacement for George Cukor, who had gone off to direct GONE WITH THE WIND. At any rate, no matter how he came to the project, he certainly gave it that wonderful mix or wry humour and genuine warmth. NINOTCHKA feels like it lives in a strange half-world - not quite real but not completely absurd either. It feels like emotions and politics are heightened - lifted above the floor by an inch or two, thanks to the sheer charisma of the cast and genius of the script. The real-unreality reminds me of one of my favourite plays, Peter Ustinov's satirical comedy Romanoff and Juliet. The play is set in a surreal fairy-tale land somewhere between the Cold War and reality and is told with a wry detachment but subtle understanding that, I feel, only comes from the cultural cosmopolitan. Maybe it's pushing it a little too far, but I can't help but wonder whether there's something in both Ustinov and Lubitsch being Russian émigrés, with that outsider's ability to look coolly at the folly of different political regimes.
That cool urbanity runs through every scene of the film and is part of its central concept. NINOTCHKA feels modern - post-modern even. It takes one of the most beautiful romantic leading ladies in Hollywood - a woman famous for the deathbed romance of CAMILLE - and made her play against herself. Without make-up, suppressing her innate charisma, refusing to be romanced, Garbo subverts her natural place in the Hollywood movie. That subversion - that brilliant daring - is what keeps NINOTCHKA fresh and captivating today.
NINOTCHKA was released in 1939 and was nominated for Oscars for Best Picture, Best Actress, Best Original Screenplay and Best Original Story. It lost to Gone With The Wind in the first three categories, and to Mr Smith Goes To Washington in the last.
Posted by Bina007 at 23:00