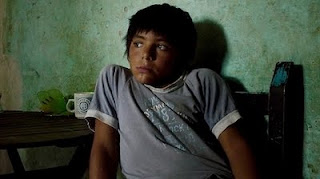 YATASTO sounds like it's going to be a rather earnest but dull social realist documentary about poverty in contemporary Argentina.  After all, the doc is described on festival programmes as following three young poor boys as they drive a donkey and cart through the rich parts of the city, collecting trash to sell and make money to live. The donkey, called Yatasto, gives the movie its name. But, to my surprise, YATASTO is actually surprisingly funny and heart-felt, and even pampered Western audiences in an art-house cinema can relate. This is because the movie is given a lot of heart and warmth by its three protagonists - the young kids have a great sense of humour, do the kind of goofy things all kids do, and are beautifully captured by a camera that seems to have simply become part of the furniture for them.  The resulting footage never feels forced or grim, but is just a delight of wonderfully observed small moments. You leave the cinema feeling that you really know the kids - their hopes, dreams, boasts, delusions - as well as their families.  A real hidden gem of the festival.
YATASTO played Buenos Aires, Marseille, Hamburg and London. It does not yet have a commercial release date.
Posted by Bina007 at 18:15